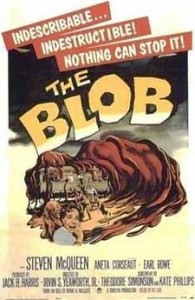 A meteor crashes outside a small town. A young couple (Steve McQueen, Aneta Corsaut) at lover’s lane witness the crash. Before they get to the crash site a old man who lives nearby gets to the site first and discovers the meteor. The old man cracks open the meteor with a stick and a blob like substance inside crawls up the stick and engulfs his hand.

Just then the couple shows up and discover the old man. They take him to a doctor who thinks he has to amputate to save his life. Any attempt to remove the substance fails. The doctor sends McQueen back to the site to dig up some clues on what the stuff is and then goes to operate on the patient.

Before he gets a chance the substance consumes the old man and then the doctor’s nurse. By the time McQueen gets back he witnesses a larger blob killing the doctor. McQueen and Corsaut go to the police but the cops don’t believe them.

Meanwhile the Blob is killing more people and getting even larger and nothing seems to stop it. Things get out of hand when the Blob pays a visit to a midnight movie theatre. Released in 1958 it was Steve McQueen’s first leading role. The film spawned an late sequel in the ’70s directed by Larry Hagman and a remake in the 1988 with a screenplay co-written by Frank Darabont.

One thought on “31 Days Of B-Movie Horrors: The Blob”