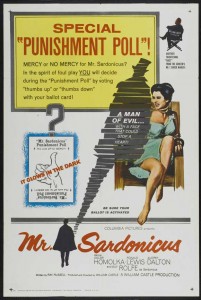 William Castle loved his gimmicks to sell his movies. The Tingler featured select movie theatre seats that sent a shock to audience members in order to provoke everyone into screaming. Macabre came with life insurance in case you died of fright and 13 Ghosts featured Illusion-O, a pair of coloured glasses that allowed viewers to see the ghosts which you could take off if you were too scared to see the ghosts.

Today’s picture is the 1961 horror Mr. Sardonicus. It’s the late 1800’s and Doctor Robert Cargrave (Ronald Lewis) is summoned by Baron Sardonicus (Guy Rolfe) via the Baron’s wife Maude(Audrey Dalton). Cargrave knew Maude a while back and goes to see the Baron. The Baron has a bad reputation, people are afraid of him and his servants have been mistreated and scarred by him. Cargrave has been summoned because Baron Sardonicus is horribly disfigured and he hopes that the good doctor can cure him.

To force Cargrave to cure him, Sardonicus threatens to disfigure Maude to make her look like him. Cargrave reluctantly agrees. The gimmick that Castle come up with for this film is a punishment poll. Near the end of the movie the audience has a chance to decide the fate of the villain, whether he should be spared or die. The audience was given a glow in the dark card that featured a thumbs up or if flipped, a thumbs down. Castle pretended that there was two endings to the movie, there was only one because he rightly believed that no audience would ever vote to save the bad guy’s life.

The make-up for Sardonicus’ face is pretty gruesome and Castle wisely seldom showed it. The movie is pretty entertaining, Castle was a better director than his gimmicks even if he never really directed a serious movie (he almost directed Rosemary’s Baby but had to settle for producer).