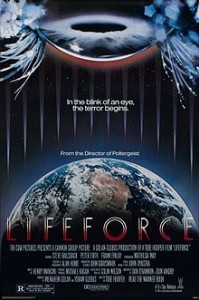 Tobe Hooper had changed horror with The Texas Chainsaw Massacre in 1974 but he struggled to recapture that glory after. He did have success working with Steve Spielberg on Poltergeist and he tried following it up with 1985’s Lifeforce.

Lifeforce starts with a group of astronauts investigating the tail of Hailey’s Comet. Hidden in the tail is an alien spaceship. All on board are dead and they look like weird bat-like creatures except three people, two men and a woman but they are unconscious and they look like us. The astronauts bring all three on board and return home. Earth loses contact with the ship and when it lands all the crew is dead and there was a fire on board the ship. The three aliens are fine though. they are brought to an army base in the U.K.

The surviving astronaut (Steve Railsback) crash lands in an escape pod in Texas and is flown to London where he reveals that the aliens are space vampires and they drain life force from people. He started the fire trying to kill them. It’s also revealed that the head female alien dubbed Space Girl (Mathilda May) has a telepathic link to Railsback. Space Girl wakes up and drains the life out of a guard and escapes. Railsback and Peter Firth give chase trying to capture her using Railsback’s psychic link not realizing that the vampire’s drained victims themselves become zombie vampires that drain and create more like them.

Based on the novel The Space Vampires the production company tried to spruce up the title so it didn’t sound like a cheap B movie horror. After the main stream success of such films as Jaws and Star Wars, B movie plots were suddenly acceptable and studios to this day still try to cash in. Lifeforce failed and bombed big time at the box office. It has since found a cult following.