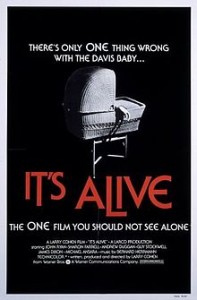 “There’s only one thing wrong with the Davis baby… It’s Alive.”

Ryan comes into the room and sees the carnage but the baby escapes. The police start hunting the infant and Ryan decides that he won’t be father of such a monster and starts hunting it down to kill it himself.

It seems that a pharmaceutical company supplied the drugs that deformed the baby and it wants it dead so that it can’t be traced back to them. Meanwhile baby is trying to make it’s way home, killing people along the way.

This 1974 Larry Cohen movie amuses me, it’s fast paced and entertaining. Strangely the scariest thing about the film is the TV commercial for the movies re-release in 1977. Damn commercial freaked me out as a kid. The film spawned two sequels both directed by Larry Cohen.