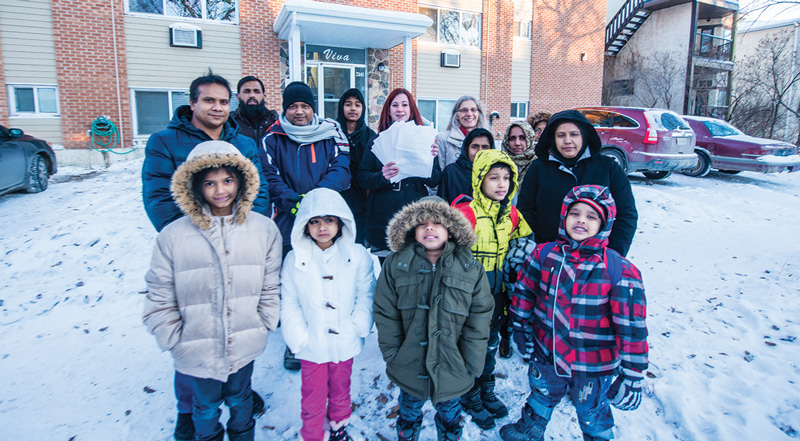 As we reported last issue, residents of the Viva Apartments (2141 Rae St) were issued a Notice to Vacate by their landlords last month and were informed that they’d have to leave their homes by the end of January. Late last week, these tenants learned that their property manager, Night Hawk Properties, had met with the Office of Residential Tenancies and were informed that the paperwork attached to their Notice to Vacate was incomplete; Night Hawk has yet to obtain the necessary permits to conduct the renovations that they say necessitate the eviction of their tenants.

So, that Notice to Vacate is invalid. For now.

“The landlord is required to have all permits to carry out the renovations before they serve the notice to vacate,” says Dale Beck, director of the Office of Residential Tenancies. “It makes no sense that they would evict people and then discover that they can’t get permits. They didn’t have those when I reviewed (the application). So, I assume they’re off busy trying to get permits now. If and when they get those permits, they’ll be free to serve notices to vacate once again.”  In Saskatchewan, the minimum notice is 30 days, so Beck says if they issue another Notice to Vacate by the end of December, the January 31 eviction date will still stand.

What is especially worrying to the tenants is that they got this information not through their landlord of the Office of Residential Tenancies but, rather, second hand through Peter Gilmer of the Regina Anti-Poverty Ministry who has been working with the Viva Apartments’ tenants, and got in touch with the Office of Residential Tenancies last week.

“It was confusing for me to find out, second hand, that the the Rentalsman met with the landlord without us knowing that it was even happening,” says tenant Angela McLean. “But to learn that they don’t have any of the permits to do renovations makes us really wonder what the purpose of this eviction is if they don’t even know what the renovations are going to be – and haven’t applied for those permits.”

According the City of Regina, Zarkor Construction (Night Hawk’s parent company) is the contracting company that will be carrying out the renovations, and are in the process of putting together an application for the correct permits – though as of Friday, no application had been submitted. For confidentiality reasons, the city says they cannot disclose what type of permit Zarkor is applying for, or what the nature of the renovations will be, and that information cannot be disclosed until the the application is received and approved.

Those are a lot of unknown variables, but McLean says the lack of communication between the building’s owners and tenants has been par for the course.

“There has been no communication to us from the property management company. It’s hard enough that they’re evicting us in the middle of winter, but when they don’t even give any basic explanations to questions like ‘Why?’ ‘What renovations are you doing?’ ‘Why does it have to happen now?’ – and to be completely ignored by the person that you’re paying $900 a month to – that’s more frustrating than anything else.”

In a phone conversation with one of the owners of Vineyard Property Corp, Prairie Dog was told that the owners are applying to the Saskatchewan Housing Corporation for a repair grant to help with the renovations they intend to undertake. For confidentiality reasons, the SHC could not confirm whether they had received an application from either Night Hawk or Vineyard Property Corp. , but said that if such a repair grant is approved, the owner would then be legally obligated to maintain and operate their building as designated affordable rental housing for a minimum of five years.

But none of this information has been relayed to any of the current tenants by either Vineyard or Night Hawk. So, for now, they’re left not knowing what to think.

“We have no idea how to plan for the future,” McLean says. “It’s really difficult gambling on whether or not we’re going to have a place to live at the end of January. It’s hard to even look for a place right now. When you don’t know what’s happening, it’s impossible to plan.”

“If they would just explain to us what’s happening and why, that would at least alleviate the immediate concern and help us understand.”