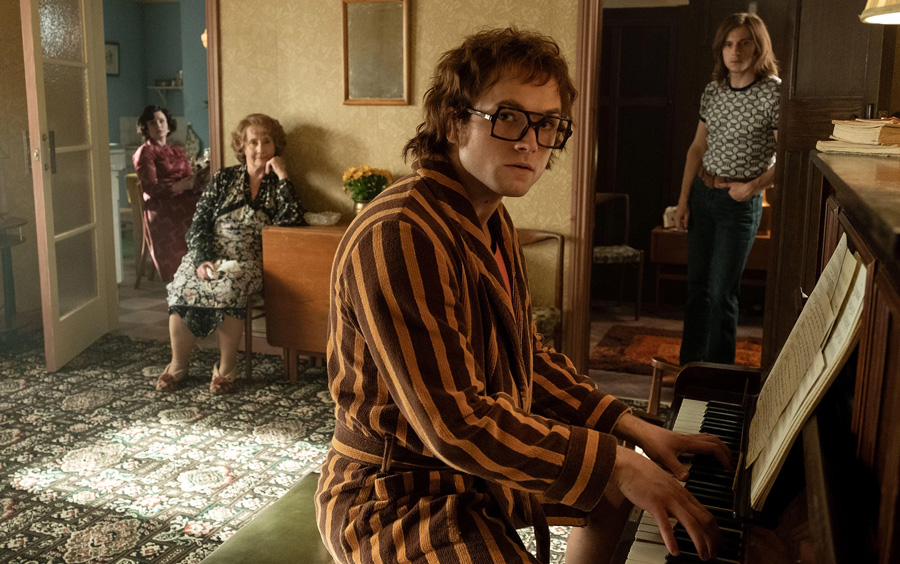 Heard outside the premiere of Rocketman:“That took me down memory lane!”

Let me tell you, clueless patron: you got the very minimum out of the superb Elton John musical/biopic.

My main concern about Rocketman was that it would follow the Bohemian Rhapsody pattern: slight and self-congratulatory. Not only did it not, it succeeded at being insightful and — more impressively — relatable. I normally find it hard to root for multimillionaires whose miseries aren’t comparable to 99 per cent of the population. And yet, here we are.

Director Dexter Fletcher (Eddie the Eagle) and scriptwriter Lee Hall (Billy Elliot) find the thread that connects Elton John with the rest of us mortals, the chip-on-the-shoulder that accompanies us for life that, most of the time, we’re not even aware of.

We first encounter Elton (Taron Egerton in a career-making performance) crashing an addiction meeting, dressed in a fire-orange suit, with matching wings and horns. It doesn’t take much to get him talking: born Reginald Dwight, little Elton was thoroughly ignored by a distant father (a “hugs make you soft” kind of guy) and a narcissistic mom. It was his grandmother who prevented the kid’s natural musical talent from going to waste.

As depicted in Rocketman, Elton John is an introvert forced into a never-ending party. The only way to survive is by overcompensating, hence the extravagant outfits. The number of perfectly accurate costumes the movie goes through is insane.

The film succeeds on several counts. While the protagonist’s unbridled pursuit of affection as by-product of his lousy parents is as broad as it gets, it feels real. This achievement comes courtesy of Taron Egerton, who perfectly embodies the public and private Elton personas. Egerton conveys his character’s vulnerability through every stage, and makes Elton John’s songs his own. Next to this, Rami Malek’s work as Freddie Mercury is like a Saturday Night Live skit.

Egerton is supported by a subdued Jamie Bell, Richard Madden’s devilish charm and Bryce Dallas Howard, who’s surprisingly good at playing villains hiding their cruelty behind a veneer of respectability (see: The Help).

Rocketman benefits enormously from Elton and Bernie chronicling their rise to the top — warts and all — extensively through songs. Ergo, every milestone has a monster hit or deep cut to go with it. It’s organic, not strained like Mamma Mia. “Goodbye Yellow Brick Road” is the cornerstone of the film, but “Saturday Night’s Alright for Fighting” provides the juice that boosts the film to instant classic territory.

Dexter Fletcher, who took over for Bryan Singer after he was fired from Bohemian Rhapsody, does a great job keeping things tight given the sprawling scope of Elton John’s life and work. Even though it’s the most contrived of movie genres, Fletcher keeps this musical intimate while letting his freak flag fly. If the renditions of “Crocodile Rock” or “Your Song” don’t give you goosebumps, you’re probably dead inside.

Ultimately, Rocketman is the love story of a man with himself. The film deals with biopic tropes like rise to fame, descent into drugs, and sexuality in adult fashion, and at no point do they overtake the narrative. The epilogue is a bit too syrupy, particularly after furiously eschewing any whitewashing of Elton John, but it’s a forgivable offence for a terrific movie. I didn’t want it to end.