The War In Star Wars

Rogue One: a gritty, high-stakes blast from the past 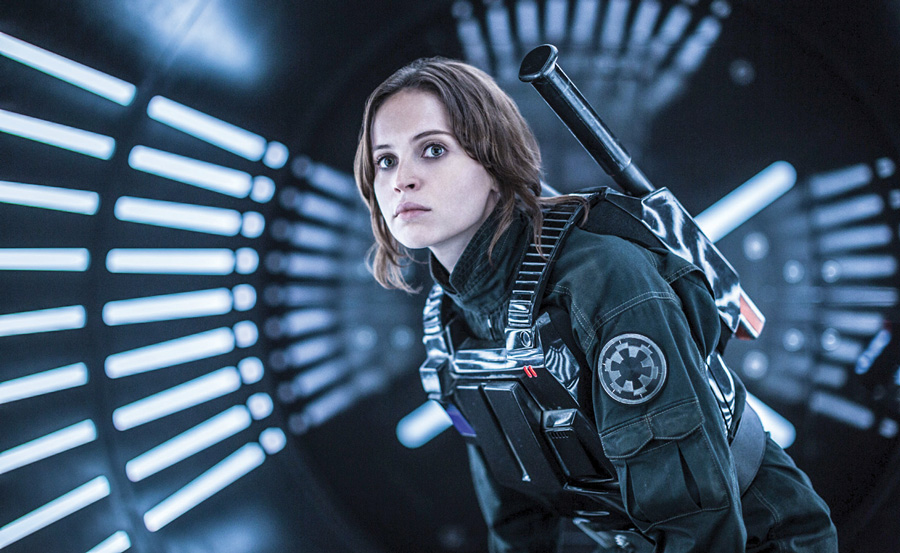 While the return of the Star Wars franchise in the form of The Force Awakens was wholeheartedly welcomed, Episode VII raised a few red flags. From another young hero on another desert planet to another droid carrying secret information to another planet-killing space station, The Force Awakens’ similarities to Star Wars were abundant and conspicuous. I know I wasn’t the only one wondering if the new trilogy was heading toward being a watered-down remix of the original.

We’ll get a sense of where the Star Wars saga is going next December in the still-untitled Episode VIII. In the meantime, we’ve got Rogue One: A Star Wars Story, which delivers the most original tale of the Rebellion since Return Of The Jedi.

Sure, its structure is videogame-like and the plot contrivances can be exasperating, but Rogue One’s characters are edgier and their interactions are a lot spikier than what we’ve become used to.

The story is set shortly before Star Wars and follows Jyn Erso (Felicity Jones, The Theory of Everything), the abandoned daughter of a weapon designer “employed” by the Empire. Jyn has serious trust issues and doesn’t think highly of the galaxy’s rulers or the insurgence. The Rebel Alliance recruits Jyn (under duress) to pursue information regarding her father (Mads Mikkelsen), and his involvement with something called “Death Star”.

Since sullen Jyn lacks commitment to the cause, she is paired with Cassian Andor (Diego Luna, Y Tu Mamá También), a rebel agent not above getting his hands bloody for the greater good, and K-2SO (Alan Tudyk, Firefly), a reprogrammed imperial robot with no filter. Along the way, a few more renegades join a mission that gradually becomes different from the one the Alliance sanctioned.

For a story whose outcome is well known (see Star Wars), Rogue One packs plenty of thrills. One of the smartest things it does is taking inspiration from the right sources — namely classic war films like The Dirty Dozen and The Bridge on the River Kwai. It’s also wise enough to more fully explore the Star Wars galaxy: there are more planets here than in the first trilogy combined, and they’re not weirdly pointless copies of previously established ones (like Jakku was for Tatooine).

Since Rogue One is a one-shot, the stakes are through the roof — none of the heroes need to survive for a sequel. The film shows some interesting dissension in the ranks, both in the Empire (power struggles) and among the rebels (acceptable levels of radicalism), which is a fun dose of texture. As in previous instalments, there’s a lot of humor, only this time it emerges organically. K-2SO has the best jokes, but he’s no laughing stock like C-3PO.

Director Gareth Edwards (Godzilla, Monsters) is a competent craftsman who makes good use of elements previously established by the franchise, particularly ships and weapons placed in new scenes and environments.

The acting is good, although Jones struggles with her transformation from angry renegade to full-blown hero. The vets, however, knock it out of the park: Mikkelsen is predictably good as a man in an impossible situation, Ben Mendelsohn is delightfully malevolent, and Forest Whitaker finds a way to be too rebellious.

If there’s a weak spot in Rogue One, it’s the music. The usually reliable Michael Giacchino creates a score supposedly inspired by John Williams’ emblematic tunes. The outcome, however, resembles a cheap knock-off. Thankfully, every so often the real thing pops up, thrilling as always. Also, while I don’t want to nitpick or spoil the fun, there’s a questionable use of computer graphics that’s both impressive and distracting. You’ll know it when you see it.

Unlike any other franchise, a new Star Wars movie can be considered a life event (I can pinpoint where I saw each one of the prequels and Episode VII). Make it a special one — the movie does its part.