Return Of The Shells 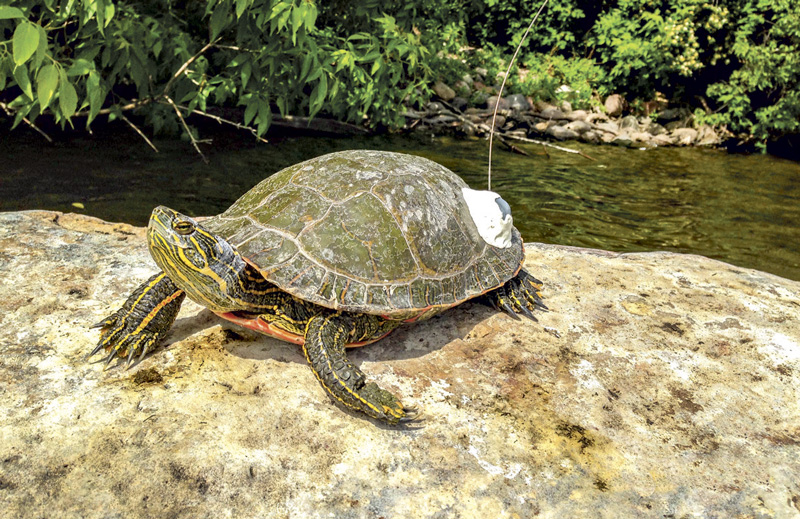 Last summer, I talked to University of Regina masters science student Kelsey Marchand about her two-year project studying western painted turtles. The turtles — whose range extends up to Saskatoon — live in freshwater environments.  Marchand’s focus is on the turtles in Wascana Centre, which has three types of turtle-friendly habitats — lake, marsh and creek. Wascana’s diverse habitats give researchers a decent snapshot of turtle habitat in southern Saskatchewan.

Turtles have a rep for being slow and ponderous but they’re actually quite agile and alert. That didn’t stop Marchand and her assistant from nabbing 60 last summer for marking and tests, though. Twenty-three of those were outfitted with radio transmitters to track their movements leading up to winter hibernation.

When I contacted Marchand to find out how the winter part of her study had gone, she was in the field for her second summer of research. It’s turtle nesting season so she was super busy, but squeezed in an interview.

Of the 23 turtles you tracked, 13 hibernated in the marsh, two in the lake and eight in the creek west of Albert Street. Did those findings meet your expectations?

Last winter was especially mild. Do you think that impacted on turtle behaviour?

I don’t think it had much impact. In the world of a turtle, winter was about the same as other years, albeit shorter with an earlier spring. The water temperature hovered around two degrees, and the ice where they were overwintering was about 1.5 feet thick. In a typical winter, the ice might get a bit thicker. However, the water conditions themselves would perhaps be fairly similar.

You drilled holes in the ice and inserted an underwater camera. You also checked the water quality. What were you looking for?

The purpose of checking water quality was to see what conditions the turtles are living in. What temperature were they surviving at? Did it change throughout the winter or remain fairly constant? Same with dissolved oxygen, as this is what they would use to obtain oxygen beneath the ice.*

I also wanted to see what was special about the area they chose. Were the water depth and quality conditions similar to those available throughout the marsh, or are they selecting for certain conditions? One finding that stands out is that the turtles are choosing to be between Goose Islands. This area is much deeper than most of the marsh which would be beneficial during a typical harsh winter as many areas throughout the marsh might freeze solid.

Do some turtles die during the winter?

There is winter mortality in turtles. It’s hard to document though, as their carcasses would sink to the bottom versus float to the top like fish in a winter kill. It can be due to age, but many winter-related mortalities are due to predation (animals taking advantage of turtles who are not able to move quickly), as well as metabolic acidosis due to lack of oxygen. Painted turtles can survive without oxygen for some time, but that involves the build-up of a byproduct of lactic acid in their bodies [similar to a cramp we get in our muscles if we don’t cool down and stretch properly following exercise]. This build-up can cause them to become acidic, which is fatal.

How have things been going this summer? Does the population seem similar to last year?

Things have been going great! With the early spring, the turtles were out moving around far faster than they were last year, so it’s been full steam ahead since day one. The population seems to be about the same as last year, with a few new additions from hatchlings that emerged from nests this past spring. Fingers crossed a few make it to maturity!

You found eight hatchlings on May 31. Are they on their own from the time they’re born? At the other end of the age spectrum, what would you guess is the age of the older turtles?

The hatchlings were the most exciting experience I’ve had in a while. Even though I’ve been helping turtle research projects for years, I’ve never come across hatchlings fresh from a nest. The mother buries the clutch in the soil, typically in June, and from there on the turtles are on their own to get out, get to water, and survive. They are quite amazing critters though, because they always seem to know what they need to do.

As for the other end of the age spectrum, unless you have a long record of turtle captures, it’s impossible to know how old most turtles are. Studies in other locales have found turtles live up to 50 years. However, that’s just what we can document. Perhaps they live to be older and we just aren’t aware. I would speculate there are quite a few in that age category in Wascana.

Will you be doing a winter study again this year to compare results and see if turtles are consistent in their behaviour or if it varies from winter to winter?

Yes, I will be! It will be interesting to see – if this winter ends up being more “typical” – how the conditions of their overwintering sites change.

*Hibernating turtles “breathe” through a fascinating process using special tissue at their cloaca (butthole) to extract oxygen from water. Can you breathe through your butt? No. Turtles rule, humans drool.