Dinosaur is just not up to Pixar’s high standards 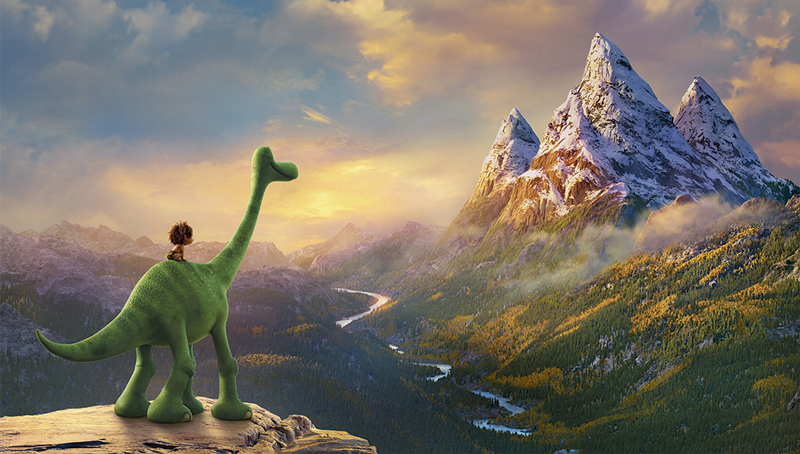 On the heels of Inside Out — arguably the best Pixar movie to date — The Good Dinosaur has big shoes to fill. In development since 2009, the film endured directorial changes, script retooling and casting substitutions. The outcome turned out fine, but nothing out of this world. More Cars than Toy Story.

The Good Dinosaur kicks in by altering history (unless you’re a creationist). In this scenario, the comet that wiped out all the dinos 65 million years ago missed Earth, which allowed the creatures to witness the dawn of the human race.

The film focuses on a family of Apatosauruses — specifically, the runt of the litter, Arlo. Unable to find his place in the household and too timid to challenge his siblings, Arlo is at a loss. Classic Disney circumstances (see Bambi, The Lion King) separate the young dinosaur from his family, and leave him lost a long way from home.

The treacherous journey becomes considerably more tolerable thanks to Spot, a human child who behaves like a dog. Initially a nuisance (the kid is indirectly responsible for the dinosaur’s predicament), Spot soon proves his value to Arlo, whether it’s dealing with snakes or finding edible berries.

Dinosaur targets a younger audience than Inside Out. The draw of dinosaurs among millennials cannot be understated: Jurassic World nearly made as much money as Titanic! Unfortunately, the film is not particularly interesting for adults.

There are some tonal issues I can’t recall seeing in a Pixar movie before, such as bursts of intensity that will likely scare the bejesus out of the young ones, hallucinogenic fruit and some odd-looking pterodactyls that share more than a passing resemblance to drug-crazed tweakers. It’s clear the many hands involved in the making of this movie muddled the result.

A bit more troubling is how average the message is. “Believe in yourself” is as pedestrian as it comes, good for DreamWorks Animation but not for Pixar. When a studio tackles death, extinction, human psychology and the value of criticism, it’s fair to expect more than a platitude.

One element that does work is reimagining the dinosaurs as if they were going through the same stages of evolution as humanity. Arlo and his family are farmers, and later in the movie he encounters friendly t-rexes who make a living as cowboys (appropriately, the head of that clan is voiced by Sam Elliott.) Meanwhile, humans live as scavengers and try to keep their distance from the considerably bigger and smarter dinos. This is a world I would have liked to see more of.

There is a gloriously weird scene involving a Styracosaurus introducing the critters living on his horns: “This is Dreamcrusher. It prevents me from having unrealistic expectations”. Easily the biggest laugh in the movie. Act accordingly.