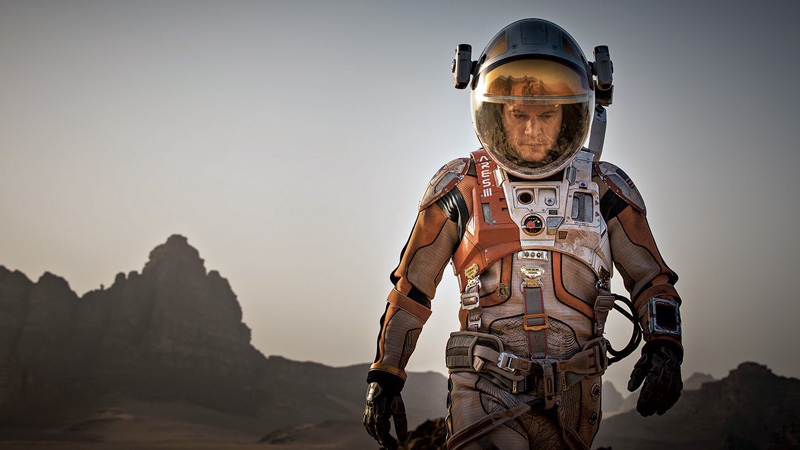 During last year’s media blitz for Interstellar, Christopher Nolan couldn’t stop talking about his desire to make sci-fi optimistic again. It’s too bad, then, that Interstellar was largely only optimistic in theory — Matthew McConaughey’s character spent more time blabbing about humanity’s potential than demonstrating it. But Nolan’s charge to return to more optimistic sci-fi was only off by a year: The Martian is the most entertaining and optimistic sci-fi movie I’ve seen in a long while. By intercutting moments of sheer cinematic wonder with plenty of scenes of highly competent people doing their jobs, director Ridley Scott shows he understands something that Christopher Nolan never grasped: we don’t need a hero dragging us against our will into the future, we just need a few gutsy scientists leading by example.

The Martian is adapted from Andy Weir’s bestselling page-turner, and it’s quite possible that purists will be offended by the many changes in Drew Goddard’s adaptation. The premise — after a freak accident, astronaut Mark Watney is stuck on Mars with no way home — is the same, but the novel is a one-man show narrated by Watney, and the film is an ensemble piece that includes the many characters trying to bring Watney home. It’s a necessary shift; a movie of nothing but Watney making smartass comments to himself and resolving engineering difficulties in one long monologue would have been interminable.

And if you’re going to turn a monologue into an ensemble, you could do a hell of a lot worse than this ensemble: Chiwetel Ejiofor, Jeff Daniels, Kristen Wiig, Sean Bean, Mackenzie Davis, and Donald Glover play NASA employees on earth, and Jessica Chastain, Kate Mara, Michael Peña, Sebastian Stan and Aksel Hennie are the astronauts who left Watney behind on Mars. This is basically a list of every actor doing interesting things in Hollywood right now. A few of the performances are from fresh off the showboat — Glover is a tad too eccentric — and the NASA employees are entirely too well-dressed for STEM nerds. But if the biggest quibble you have with a film is its wardrobe, you know you’re stretching for a complaint. (Actually, make that two quibbles: the 3D is slightly better than most, but it’s nowhere as good or as essential as the 3D was in, say, Gravity; you’re better off watching The Martian in two dimensions.)

Even though Watney’s role is diminished from the book, the fact is that Matt Damon, as Watney, is the center of the film. He nails Watney’s essential decency, his problem-solving acumen and his wiseass running commentary, and his enthusiasm for the part is infectious.

Until now, Damon has always been at his best when playing voids (the amnesiac Jason Bourne, the Talented Mr. Ripley) and at his worst when portraying everyman characters (Elysium, We Bought a Zoo). Something about those personality-free schemers inspire Damon to deliver his mightiest performances, but he rises to Watney’s challenge and inhabits the character fully. Perhaps because in this case his typical internal vacuum has been externalized in the actual vacuum of Mars’ dead atmosphere, Damon seems comfortable acting like a normal person. But this might be overthinking it; The Martian is refreshing in part because it doesn’t force outer space to stand in as a metaphor for parenthood or love or anything goopy like that. Instead, it’s an indifferent force that will kill Watney if he demonstrates even a moment’s weakness.

The Martian understands that those stakes — man vs. nature — are more than enough for one movie, and it demonstrates the basic pleasure of observing competency. The best way to inspire optimism is to be really, really good at your job.