Bengough ’Til You Drop

Five reasons the Gateway Festival is your top July Jam 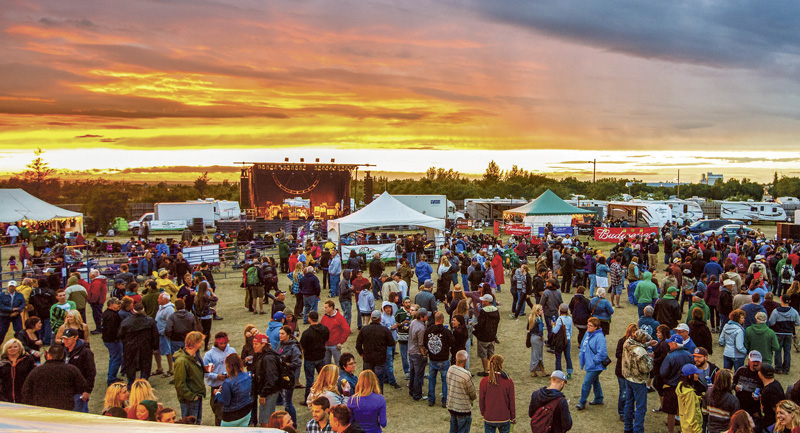 It’s not exactly an area of the province known for art, music and culture, but over the past decade Bengough, population 350-ish, has built up a reputation as host of one of Saskatchewan’s most impressive music festivals.

With a series of stages, a dusty rodeo area, a campground filled with RVs and a mini-village of brightly coloured tents, it’s also a unique Prairie experience.

Located roughly 90 minutes south of Regina, Bengough is pretty much your last stop before the Big Muddy. Surrounded by picturesque fields, it’s a typical Saskatchewan small town with a gas station, a hotel, a pool and limited amenities. Nevertheless, the town pulls it all off with much aplomb.

Drawing an impressive cadre of touring musicians — including previous artists such as Steve Earle and Corb Lund — Gateway is about uniting a diverse range of sounds that a diverse audience can all get behind and dance to.

It’s a surreal sight, watching Queen City hipsters mingle with the older folks who make the event part of their summer vacation getaway. Meanwhile, back stage, performers hang out and quaff pickled eggs.

Somehow it all works. And it’s a mix festival organizers like artistic director Mike Dawson have capitalized on.

“Gateway Festival existed and had grown into a very supportive community of volunteers and attendees for eight years before I came along,” says Dawson. “My sincere approach has been to remain conscious of that with hopes to expand on that community rather than dismantle it, and so I do take a lot of care in curating the festival.

“It is my hope that people leave the festival as fans of some artists they may not have been familiar with in the past.”

Here’s five important things to know about this year’s festival.

1. THE MUSIC: TOURING ACTS The first thing you might notice from the official festival poster — aside from the excellent artwork from Saskatoon artist Donny Sparrow — is the split between indie rock and folk and country.

The headliners include Joel Plaskett Emergency, the Nitty Gritty Dirt Band, Ian Tyson, Hayden, and the Harpoonist & the Axe Murderer. It’s a lineup meant to draw in curious music fans from across the province, says Dawson.

“I try hard every year to book a couple of Prairie-centric artists that don’t tour or perform frequently, Dawson says. “In the past we’ve had artists like the Northern Pikes and Limblifter. This year I feel like John K Samson and Chixdiggit are those artists. Both have had long and influential careers, and both have a lot of fans around the province but rarely perform here.”

Samson, frontman of the recently departed and much-beloved Weakerthans, has a solid back-catalogue of solo material to draw upon. But rumour has it that he also plays the hits from the days when he used to slum around with hardcore legends Propagandhi. Also, for those looking to bob their heads to something a little more edgy than the folk main stagers, prepare to be taken back to your high school punk rock phase circa 1994 via Calgary skinny-pants legends Chixdiggit.

Dawson also booked some acts that were a once-in-a-lifetime opportunity.

“Definitely having a country legend like Ian Tyson perform in Bengough will be a very special moment as well,” he says.

It’s probably worth mentioning that country legend Tyson is 81 years old and is still going strong.

2. THE MUSIC: LOCAL ACTS The Gateway Festival also draws both established and up-and-coming performers from across the province. Regina acts to watch for include Rah Rah, The Florals and Orphan Mothers. Meanwhile, Saskatoon loans several of its buzz groups, including the Karpinka Brothers, We Were Lovers and Mario LePage.

3. THE BIG MUDDY IS MIGHTY IMPRESSIVE Music isn’t the only thing at the festival. The mysterious mound of rock known as the Big Muddy is a must-see for festival-goers. A mighty hunk of earth that looks like it could have been scooped from a massive Jell-O mold, the rock offers a great view of the surrounding area, if climbing mini-mountains is your thing.

“I’ve said a couple of times that I love that Bengough is located on a highway to nowhere — it’s incredible that if you continue along the highway just a few kilometres past town you find yourself in the middle of the badlands,” says Dawson.

Also, watch out for roaming herds of cows on the road. Seriously. And if you spot any slithering bullsnakes or yellow-bellied racers, take a picture and e-mail it and the location of your encounter to a local scientist — specifically, Tera Edkins. Her e-mail is snakes@royalsaskmuseum.ca.

If you keep going past the Big Muddy turnoff — which I did one year — you’ll find yourself at the U.S. border at a ghost town called Whitetail. Essentially a checkpoint that was decommissioned in 2013, the border crossing is unmanned, although there’s an impressive cement barricade to keep us Canadians out. So don’t even think about sneaking across for cheap booze.

4. IT’S A LOT OF FAMILY FUN Organizers have made sure that no one is left out of the good times. There’s a children’s parade and a stage set up at the town’s outdoor pool for those who might not make it inside the festival grounds. And on Saturday morning there’s a magician and long-running boy-band vocal group, Hoja.

“Also, the Karpinka Brothers will be performing at a pancake breakfast,” says Dawson.

“What could be more beautiful?”

5. IT’S ALSO A COWBOY-LOVING, BBQ-IMBIBING, LITE-BEER-CRUSHING BARNBURNER Okay, okay, as much as we love the diversity of the acts, the food and the friendly atmosphere, Gateway Festival is also a great time. And yes, there will definitely be cowboy moments, and BBQ and lots of lite beer to crush. It’s all in the spirit of having a good time, so you might want to consider taking Monday off work. It’s one of those weekends where you could wake up with too much party all over your face.

Learn more about the Gateway Festival — including ticket info, schedules, full lineups and more — online at gatewayfestival.com, and follow the fest on Twitter: @Gatewayfestival.