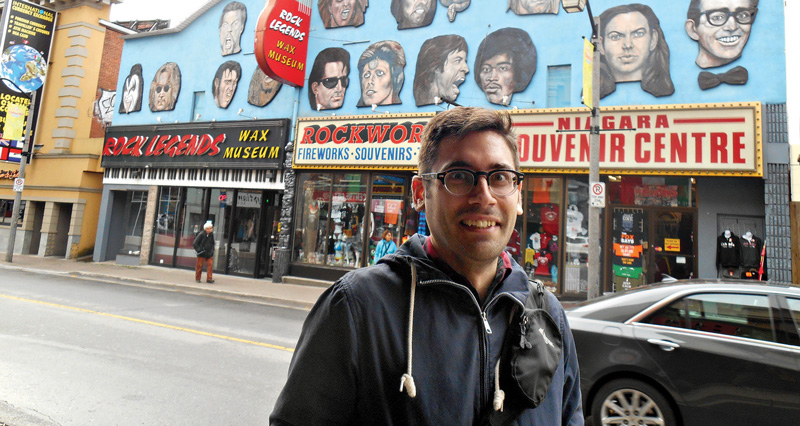 Regular Prairie Dog readers have probably noticed we’ve been running a new comic by an old friend. Murray Geister: Paranormal Investigator is an ongoing, serialized strip by Dakota McFadzean, a Regina-born cartoonist who currently lives in Toronto where he works as a storyboard artist for Dreamworks Animation. Besides that job and Murray Geister, he’s still drawing his daily online comic strip. It’s hilarious, by the way, which you can see for yourself at dakotamcfadzean.com and/or in the forthcoming collection Don’t Get Eaten By Anything. Look for it in May at better book and comic shops.

Earlier this month I interviewed Dakota over e-mail and asked him about all his adventures.

Hey Dakota, what’s new? How was your weekend? Do anything interesting?

Hey Steve! I just got back from New York last night. I was there for the MoCCA Fest, which is a big indie comics show that I haven’t been to in a few years. I was tabling with my publisher Conundrum Press, selling copies of my new book Don’t Get Eaten by Anything. I was also pushing things like Irene (a comics anthology I co-edit with cartoonists Andy Warner and d.w.), and a new issue of my minicomic series Last Mountain put out by Birdcage Bottom Books. Oh, and I got to visit Mad Magazine.

Mad magazine! How was that?

Well, it was as good as spending an afternoon with The Usual Gang of Idiots can be. They conned a free drawing out of me for their wall of shame signed by other Mad artists and writers. I got to meet executive editor John Ficarra, who’s been running things since around the time I was born, as well as art director Sam Viviano, who has been one of my favourite Mad artists since I saw his parody of the original Ninja Turtles movie the first time I picked up a new issue of Mad. Overall it was pretty surreal experience. This was all thanks to associate art director Ryan Flanders, who seems like a nice guy. I’m not sure how he fell in with such a lousy crowd.

Right now we’re running your serialized comic Murray Geister, Paranormal Investigator. Where did the idea of an aging, frustrated ghost-chaser come from?

It actually came from a news clip from somewhere in the U.S. that I saw on YouTube, and it followed a real life ghost hunter (I think they were trying to cash in on the popularity of one of the reality shows). It was supposed to be funny, but it was so obvious that this guy had just come across an abandoned building where teenagers hang out, and it absolutely crushed me because he so earnestly believed every shred of ‘evidence’ he found. It got me thinking about what it feels like to deeply believe in something and then be confronted with creeping doubt.

I doubt it, but it’s comforting to think that the world is covered with the spirits of everything that’s ever died, wandering around without realizing that they’ve died, confusedly trying to maintain the routines they kept when they were alive. Wait, this isn’t comfort I’m feeling at all.

How long do you see this story running for? Do you know how it’s going to end? Will Murray live happily ever after? I’m rooting for him.

I’m still figuring that out. I have the first act pretty much figured out, which I expect to run for 20-30 pages. I’d like to make it a satisfying story on its own so that I can decide whether or not to continue it. That said, I’ve got the rest of the story loosely outlined. I mostly know how it’s going to end, but comics take so long to do that it will probably morph several times before I get there. I’m rooting for Murray too, so I hope nothing too bad happens to him. We’ll see.

I understand you’re planning to collect the strips after the story ends? When will we see the book version of Murray Geister?

Yeah, if it ends up just being a short story, I’ll likely put it out as a floppy comic book. If it ends up being longer then I’ll see if Conundrum Press is interested.

You might be best known for your online daily comic strips, which you’ve been doing for what, about five years? When will we see the first collection of The Dailies at our local comic shops?

Yep, about 1, 922 days as of this interview. Don’t Get Eaten by Anything should be hitting comic book shops around May. It collects three years’ worth of strips and I’m really pleased with how it turned out. Andy Brown at Conundrum Press has been really great to me, and let me do a lot of cool things with this book. It’s hardcover, and has shiny silver letters on it.

What else are you working on these days?

Not much. I’m drawing the Dailies still, and Murray Geister. We’re planning on having another issue of Irene out by the fall. I work full time as a storyboard artist for DreamWorks Animation TV now, so the amount of time I get to draw comics has gone down a lot. Still, that job has been fun too, so I can’t complain.

Can people buy original art from you?

Yes. I have a few things up on my website but it’s in bad need of an update. There are only so many hours in a day, and I’m really starting to discover my limits as a human. Maybe if I become a ghost when I die I’ll be able to get more done.

Regina misses you. Are you coming back? Why did you leave us? We’re sad.

I miss Regina too. I left because my wife went to school and then I went to school, and then things kept happening. As Bilbo Baggins was fond of saying: “You step onto the road, and if you don’t keep your feet, there’s no knowing where you might be swept off to.”

But if you’re trying to get angry letters from my parents for not answering this question correctly, then mission accomplished.

I like squirrels and pigeons, but they don’t seem to think all that much of me.