Like great work by female artists? The Dunlop delivers 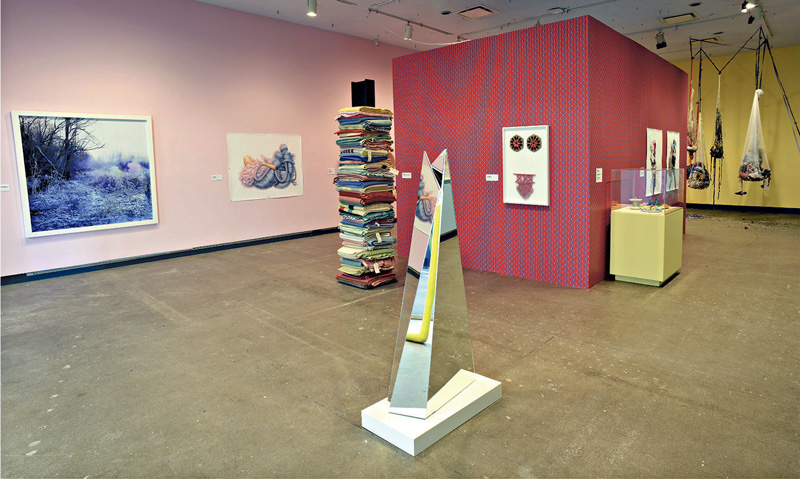 With all the fuss these days around “mansplaining”, and women expressing frustration with domineering men presuming to understand their reality and feeling entitled to make intrusive life decisions for them, I hesitated to review Material Girls.

Surely the safer bet would be to interview the curators — Blair Fornwald, Jennifer Matotek and Wendy Peart — about this blockbuster exhibition, which features work by 24 female artists and will tour nationally once it closes at the Dunlop.

But then I thought — nah, why not take a run at it? So here I am, the male Prairie Dog art critic, about to mansplain this show to you.

And just to prove my bona fides as a man, I’ll start with a sports analogy*.

I’m a casual PGA fan, but one tournament I always look forward to is the Masters at Augusta National in early April. Part of it, certainly, is the historic stature of the tournament, and its status as a “major”. But a big chunk of it, too, is the golf course, with its lush fairways and greens, and blooming Dogwood trees and azaleas. After six months of drab fall and winter conditions in Regina it’s a real tonic for the soul.

I got an early dose of that when I attended the opening reception for Material Girls on Jan. 30. There’s tons of bright colours everywhere, and plenty of eye-catching patterns and textures too.

It starts before you even enter the gallery. The exterior wall facing the library foyer has been adorned with a wallpaper work by Alex Cu Unjieng. It features an oval pattern in blue with yellow accents, and inside there’s a second wallpaper work on a gallery partition — same pattern, but red with blue accents.

Also visible in the gallery window are two quirky tube-like sculptures by Jaime Angelopoulos. One has black spots on a white background, and at the opening I overheard a girl tell her dad it reminded her of a Dalmatian. Great read kid!

There’s more to Material Girls than colour, pattern and texture. Heading in, I had two ideas in mind. The first related to Madonna and the whole Material Girl culture that arose during the Reagan years of greed and excess in the ’80s.

My second expectation was tied to fabric. For decades, female artists have used sewing, embroidery and quilting to revalidate what have previously been dismissed as “domestic” activities — and therefore, not serious art. Dismissed by men, that is, and often when women artists use fabric in their work it’s done to critique patriarchy.

Both ideas are relevant to Material Girls.

In her curatorial essay, Wendy Peart speaks of being in high school when Madonna released “Material Girl” in 1984, and expresses admiration for her as a feminist icon. Blair Fornwald references a modern material girl Miley Cyrus, and a show of sculptural assemblages she had at New York Fashion Week that incorporated all sorts of “junk and shit” (in Miley’s words) related to the death of her pet dog Floyd. Finally, Jennifer Matotek discusses the stigma attached to the “decorative” in our society, and how women are often regarded as “decoration” in relation to men, consumer products and more.

By reveling in the sheer exuberance of colour, pattern and decorative excess, the artists refute the negative associations imposed by patriarchy — and they do so in a range of materials not limited to fabric.

They also reference the female body a lot. It’s another contested battleground, rife with individual and collective concerns about status and autonomy.

There’s only one incidence of outright nudity, I think, in a photo installation by Sarah Anne Johnson, but there’s numerous allusions to the female body. In Cu Unjieng’s wallpaper works, for instance, the ovals are “yonic” — which is the female equivalent of phallic, and thus celebratory of the vulva and female sexual and reproductive power in general.

Another noteworthy aspect of Material Girls is the range of ethnicities represented. Most of the artists are heterosexual, Fornwald notes in an essay footnote, but the inclusion of Indigenous, Asian, Arabic, and European perspectives offers the opportunity for nuanced exploration of complicated issues.

For me, the standout work is Sanaz Mazinani’s Together We Are. It’s an archival pigment print, flower-shaped, with an intricate golden white pattern that recalls a design tradition in the Islamic world, where figurative representation of people is discouraged on religious grounds as idolatry.

When you move closer, though, you realize that the pattern is composed of multiple tiny images of two women aligned like face cards. One of them is Paris Hilton, wearing a white bikini. The other image is of an Arab woman in a hijab with a bomb strapped to her.

Quite a contrast, with plenty of provocative associations tied to culture, power, oppression, fear, desire and more.

Other works that caught my eye were Rachel Ludlow’s Paper Doll collages that spoke to the idea of girlhood, glamour, beauty and privilege, and Marie Watt’s Skywalker/Skyscraper which consists of a stack of worn blankets topped by a steel girder — or perhaps impaled, it’s impossible to tell as you’d have to be Yao Ming (sorry, another sports reference) to see the top. Watt is of First Nations ancestry, so allusions to colonization and the potlatch are embedded in the work.

On Feb. 28 at 2 p.m. there’s a curatorial tour for Material Girls. So do yourself a favour and check the show out.