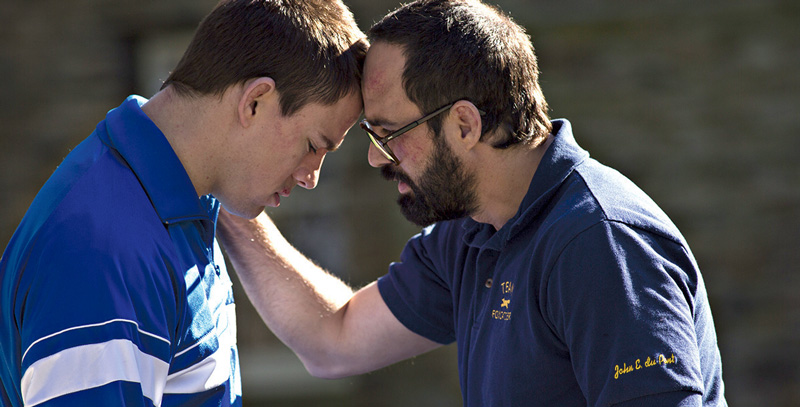 While stocked with heavy-hitters, Foxcatcher is an oddity in this year’s Oscar race. The movie is a dark allegory of modern-day America that touches some of the country’s biggest nerves, including out-of-control patriotism and barely contained anger at manipulation and exploitation by the ruling class.

This is the kind of stuff I’m going to guess people flocking to American Sniper would rather not think about.

Plot-wise, Foxcatcher is the unflinching depiction of the real-life murder of an Olympic champion. Multimillionaire John DuPont (Steve Carell), a dilettante with delusions of grandeur, becomes the sponsor of a wrestling team led by Mark Schultz (Channing Tatum). Mark is the younger brother of a ring legend (Mark Ruffalo) and while he’s won medals, he has always felt as though he’s in the shadow of his more successful and gregarious sibling. Schultz sees DuPont’s offer as an opportunity to forge his own way, and he chooses to dismiss the glaring red-flags in the behavior of his benefactor.

Much has been said about Carell’s transformation into a sociopath (it got him an Oscar nomination). Unlike Bennett Miller’s previous efforts (Capote, Moneyball), Foxcatcher is a film about some really distasteful characters. Carell’s DuPont is an obviously unbalanced man who takes advantage of his position in life to mess with others’ lives, and he gets away with it by disguising his motives as patriotism.

The acting is good all around: Channing Tatum is as good as Carell, if not better, playing the damaged, sullen Mark Schultz.

I had the chance to sit down with all three stars during the Toronto International Film Festival. Tatum and Ruffalo were gregarious and outgoing, while Carell, though pleasant, was a lot more reserved about what was going on in his head while he portrayed the increasingly unhinged DuPont heir.

Do you have to connect with the characters you play at an emotional level? If so, how did you do it with the very damaged ones in Foxcatcher?

MARK RUFFALO: You never know what’s going to turn you on about a part. Sometimes it’s something that resonates with you personally or seems fun to do, or maybe it’s the people you’re working with. In Foxcatcher, it was all three.

STEVE CARELL: We all researched the roles; we found as much as we could about them. There’s an added responsibility, because these are real people. You don’t want to be glib. Also, it’s only your best representation of who that person may have been. You are estimating. Within that, we all tried to find whatever truth we could.

Channing, I understand initially you were reluctant to be in the film.

CHANNING TATUM: The first time I read the script — seven years ago — I didn’t understand why somebody would want to make this film. There was no resolution, no lesson learned. I wasn’t anywhere near understanding storytelling or character. I’ve done a lot of growing since then. Plus, Bennett was really weird back then. Mind you, he is still is.

MR: No one knew what the movie would be. Is it funny? Is it salacious? Is it a weird sexual love triangle? The original response of many of the people Bennett took the story to was, “who would want to see that?” — which is why it took so long to be made.

Did you take the characters home during the shooting?

CT: We are still not home.

MR: Every single day we went from the set to the gym. On weekends, more gym. And washing clothes.

CT: My wife was pregnant during the shooting. She came to Pittsburgh for a week and left after the second day. She was like, “nope, this is not healthy. You’re in a weird place. That’s okay, but I’m going to go now.”

SC: When my wife asked me how it went that day, I would answer “well,” but wouldn’t elaborate. I had no energy to do so and I’m not sure she wanted to hear about it. The set was very still, very somber. Bennett set that tone.

CT: Bennett would DuPont me once in a while. If I started to laugh, he would yell “CHAN, GET YOUR HEAD BACK IN IT!”

MR: How many times did I hear that.

CT: There’s a part of you that just wants to strangle him, and you can’t. It’s his job.

There’s a scene in which you smash a mirror with your head in frustration. How do you build yourself up to reach that point?

CT: I don’t remember that scene… Have you ever been in a fight?

CT: You don’t remember the fight afterwards, maybe hitting and getting hit, but you’re not sure whether you won or lost. We only shot that scene once. I don’t remember much of it, only telling Bennett whatever was in that room probably won’t come out unscathed. The inspiration was the real Mark Schultz. He punished himself badly after a defeat, worse than whatever physical pain he was going through in the match. That way, he would never want to lose again.

The rapport between Mark and his brother David is encapsulated in a wrestling match at the beginning of Foxcatcher. Was it choreographed at all or did Bennett just let you go at it?

MR: Wrestling is different from a fight scene because unless it’s at 100 per cent, it looks fake. We would spend a lot of time choreographing a scene, but at the end of the day you had to make your move for real and put all your weight into it.

CT: This is a flow sport. It’s messy and there are no stages. You can’t use camera trickery like in boxing. But once you get used to being inside a melee, you find ways to show your character’s traits. There were 25 pages of background that Bennett ended up cutting, because everything you needed to know about their relationship was in that fight.