About a year ago, a jingoistic piece of filmmaking called Lone Survivor told audiences that U.S. forces deserve to be worshipped, and that their actions are always 100 per cent heroic. The suicidal and often irresponsible behaviour of the U.S. Navy SEALS is questioned by absolutely no one in the film (which was based on a non-fiction book by SEAL Marcus Lutrell, whose stories eventually came into doubt).

There are quite a few similarities between Lone Survivor and American Sniper, but also one key difference: Sniper has Clint Eastwood at the helm. For one thing, Eastwood makes death count: every casualty reverberates and shapes the lead character, no small feat considering he’d been credited with 160 confirmed kills.

There is still a troublingly righteous tone to the proceedings but it’s less obvious than in other war-inspired biopics.

Bradley Cooper is Chris Kyle, arguably the most lethal sniper in U.S. Naval history. A low-key Texan who’s been familiar with guns from an early age, it’s hardly shocking that Kyle finds his calling as a Navy SEAL. His skills come in handy when he’s assigned to Iraq, where he ends up doing four tours.

His proficiency doesn’t go unnoticed by his enemies and Kyle ends up with a bounty on his head  and a personal rivalry with Saddam Hussein. But at home, Kyle has problems letting his guard down and can barely hide from his wife (Sienna Miller) his desire to return to where the action is.

The matter of highly specialized warriors unable to disengage from the front has been dealt with numerous times — and in fact, American Sniper goes through the same beats as The Hurt Locker did, although with half the impact. If Jeremy Renner was a compelling cipher in Hurt, Cooper comes across as a simpleton. His post-traumatic disorder and the by-the-numbers resolution feel flat, to the point that his wife has to say a piss-poor piece of dialogue like, “I’m so proud of you for overcoming your PTSD” for the audience to find out what’s happened.

The one redeeming aspect of American Sniper is the direction. I’m not the biggest Clint Eastwood fan (he hasn’t made a good movie since 2008’s Gran Torino, although Jersey Boys was better than the critical reception suggested), but the 85-year-old knows how to stage a battle scene. The split-second decisions Kyle must make under unthinkable pressure are competently staged, with tension to boot.

The major problem I have with American Sniper is only indirectly related to the movie: Kyle (who died in 2013)  has claimed that the 160 “confirmed kills” count comes about 100 short of his own estimation. But in his autobiography, which the film is partially based on, Kyle made a couple of wild claims, including punching Jesse Ventura for badmouthing the Marines. (Ventura denies the event ever took place.) Furthermore, Kyle declared (although not in print) that he killed two carjackers and was let go by local police after they were informed of his record. Not quite the modest soldier Eastwood portrays. 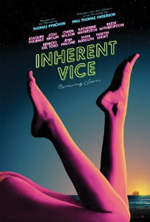 Inherent Vice has a lot of virtues but it’s fairly obvious that nobody had the audience’s interest in mind — not surprising, considering the film pairs one of America’s most idiosyncratic filmmakers (Paul Thomas Anderson) with one of the country’s most eccentric writers (Thomas Pynchon).

Private eye Doc Sportello (Joaquin Phoenix) is hired by an ex-girlfriend to find her current lover, a real estate tycoon who may have been sent to the psych ward by his wife. The mystery is entangled with two or three of Sportello’s other cases, not to mention a murder case — in which he’s a suspect. Think of it like a ’70s noir à la Chinatown, where the plot matters less than the characters’ antics.

The whole investigation is seen through Sportello’s drug-addled eyes, so don’t expect accuracy — or coherence, for that matter — from the proceedings. In fact, just discard the plot and let yourself go: this is one of those movies, like Fear and Loathing in Las Vegas, in which the journey is the true reward. But audiences hoping for a modicum of reason are bound to be disappointed. This isn’t Gone Girl.

A bigger mystery than the one that anchors Inherent Vice is how Paul Thomas Anderson got Warner Bros to bankroll the movie. It’s two and a half hours long and borderline inaccessible, even for awards consideration. I’m all for artists flying their freak flags fly, but PTA was at his best at the beginning of his career when he couldn’t get away with murder. Just because you can doesn’t mean you should. /Jorge Ignacio Castillo

We all know that Martin Luther King Jr. was the de facto leader of the Civil Rights movement in the U.S. during the 1960s, and his brilliant 1963 “I have a dream” speech is famous worldwide — but most of us have no idea how King got to that point. Selma aims to fill in the gaps.

An honest, fascinating look into the inner workings of MLK’s circle, Selma presents a man who’s clearly a gifted political strategist, but also dealing with doubts and concerns.

The film begins with King (David Oyelowo) receiving the Nobel Peace Prize in 1964 — at the same time that Annie Lee Cooper (Oprah Winfrey) is unable to register to vote in Alabama. It’s obvious that this basic right needs reinforcement in the South, but President Lyndon B. Johnson has other priorities.

With the police in towns like Selma openly discriminating against blacks and Alabama Governor George Wallace (Tim Roth) supporting it, the stage is set for a clash. So to force Johnson to do something, King organizes a march from Selma to Montgomery — despite the possibility of violence.

Director Ava DuVernay does a terrific job of lining up real events to raise the stakes. By spending the first half of the movie introducing characters and developing their personalities, the audience is completely invested when we see them put their lives on the line.

Oyelowo creates a very human MLK, fallible but unrivalled at correctly reading a situation. Tom Wilkinson as Johnson is a strong sparring partner, a man whose desire to make an inherited presidency (he got the job after Kennedy’s assassination) his own is quickly overtaken by a changing world.

Tim Roth is cartoonish as the Alabama governor — but then again, if Wallace had a mustache, he probably twirled it. Dude was a douche.

Some flourishes like extreme slow-motion shots are distracting, but they’re minor faults in an otherwise solid and poignant drama.