Seasonal albums can be brutal but this one isn’t 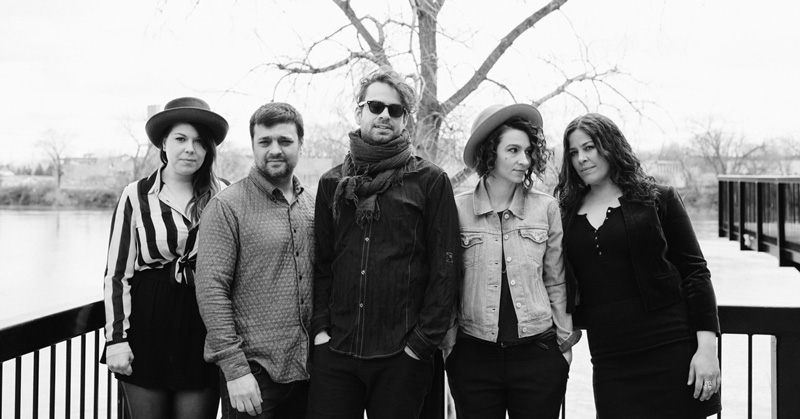 I interviewed Damian Abraham of Fucked Up once, and he told me, “If I sing it, it’s hardcore,” meaning his singing style is going to turn whatever he’s doing into hardcore. When it comes to holiday albums, there are two main approaches an artist can take: either you make a straight-up holiday album, or you make the kind of album you would’ve made anyhow, but with holiday themes.

Winnipeg’s Chic Gamine has clearly decided to combine bits from both approaches on Christmas, Vol. 1, an EP they released at the end of November.

They’re following the release with some seasonal shows, including a run on the Vinyl Café holiday tour, one of the more Canadian Christmas institutions out there. Pumping up the Canadiana cred even more is the fact that the EP features songs in both English and French.

The two French songs, “Noel (au coin de Portage et Main)” and “Un biscuit et un verre de lait”, are highlights here, featuring all the bells and gentle roots swing the band has to offer. “Last Christmas” doesn’t fare as well, but maybe Wham! just owns that song. The final track, “The Friendly Beasts”, cuts to what’s great about Chic Gamine as well as the season –– everyone sharing a verse, sharing in the fun and having a light-hearted good time.

Blue Rodeo
A Merrie Christmas to You
Warner

Another year, another Christmas album from an otherwise respectable act. This year it’s Blue Rodeo’s turn at the tinsel, and the results will afford you some mild enjoyment and zero surprises. The choice of Christmas cover material is probably the best thing about the album, with songs from Big Star (“Jesus Christ”), Joni Mitchell (“River”) and The Band (“Christmas Must Be Tonight”) thrown in alongside two original numbers and a pair of Xmas standards. Blue Rodeo knows better than to mess with such great songs. Thus, the Joni Mitchell cover sounds exactly like a Joni Mitchell tune, ditto the Band cover, and Greg Keelor’s take on Gordon Lightfoot’s “Song for a Winter’s Night” is brilliantly faithful. The rest, sadly, is Christmas corn. /Aidan Morgan

The idea that hyperactive, literate and often deeply sarcastic indie-rock band Los Campesinos! would make a Christmas album seems odd, to say the least. But the result, A Los Campesinos! Christmas, is a pretty great record, and continues their brilliant songwriting streak from last year’s No Blues. Lyrical subject matter notwithstanding, the lead single “When Christmas Comes” could slot in very nicely on No Blues or Romance Is Boring. And there are pleasant surprises, too: “The Holly and the Ivy” is an acoustic guitar and choir-laden tune that’s perhaps the most traditionally Christmas-y song on the album. It’s perhaps hard to imagine the record finding a place in a traditional Christmas album rotation, but as a testament to Los Campesinos’ reign as one of the most interesting and enjoyable indie rock bands currently in business, it’s an unqualified success. /Matthew Blackwell

Everybody makes Christmas albums, but almost nobody should. Exception: Idina Menzel. Her Broadway-honed voice cuts to the emotional core of any lyric, even those as asinine as found on “Have Yourself a Merry Little Christmas”. (It was Menzel’s mighty voice that gave such power to this year’s most important song, “Let It Go”, from Disney’s Frozen. A lot of tough guys tear up when Menzel soars into her upper register on that number.) The good news on that front is that, along with typical and totally adequate Christmas fare like “White Christmas” and “Silent Night”, Menzel’s holiday album also includes a Joni Mitchell cover. Vancouver poet Daniel Zomparelli (Davie Street Translations, Poetry Is Dead) has told me that “River” is “one song guaranteed to make me ‘ugly cry,’” and Menzel doesn’t disappoint. Her glossy, dramatic take on “River” is Ugly Cry City, and who couldn’t use more of that over the holidays? /Emmet Matheson