Marianne Faithfull puts out yet another solid record 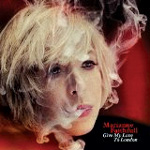 Marianne Faithfull
Give My Love to London
Easy Sound

I’m trying to place something on Give My Love to London, the 20th (!) album from Marianne Faithfull, when it hits me: there’s a guitar sound that’s similar to one on The Magnetic Fields’ synthed-up country masterpiece, The Charm of the Highway Strip.

Faithfull could do worse than to work with The Fields’ Stephen Merritt in the future — if she could fit him into her crowded list of collaborators. Nick Cave, for example, appears on London, and he brings his sidekick Warren Ellis along as well. Artists from Roger Waters and Steve Earle to Anna Calvi also lend a hand.

That big names flock to work with Faithfull is no surprise. Throughout her historic career, she’s turned out more than a few masterpieces. Her most recent, 2005’s Before the Poison, pits her unique singing style against the dark creations of Cave and PJ Harvey.

Give My Love to London doesn’t reach those heights but it still has plenty to recommend it. Faithfull’s voice is still an attraction, showing its age while retaining its expressiveness — it’s only gained in texture over the years.

Faithfull sounds best when matched with an ominous band, a bit of foreboding and the potential for dissonance. A track like “The Price of Love” is good, but its status as a standard rock and roll/blues track (complete with harmonica bits) doesn’t feel like enough when put up next to the rest of Ellis’ excellent violin and viola work elsewhere on the record. The record spins even simple arrangements — like piano, Faithfull and a few small touches — into something compelling.

Best of all, London shows that Faithfull can still surprise. “Going Home” would’ve been a fine track to close on, with a male choir in the middle and Faithfull’s simple spoken word feeling in spots like a natural conclusion to the album. But instead, she follows that exquisite slice of melancholy with “I Get Along Without You Very Well”, a song whose structure is tough to pin down as you listen to it. Faithfull always leaves you wondering what’s next.

Remember the strange days of the mid-’80s, when Canadian alternative music sounded more like drunk post-punk garage rock than 20-piece bands running around and ripping off Talking Heads? Regina’s These Estates does. Despite the extremely laidback production, and a sound mix that throws the vocals all the way into the laundry room, on Triumph, Reign These Estates sets songs about love, debt, drinking and politics to extremely earwormy melodies. Standouts include the alcoholic opening track “Put That Poison In My Body” and “Notice”, which comes off like a particularly wistful take on Pavement. Digital copies of Triumph, Reign come with, of all things, a PowerPoint presentation with lots of business-ready graphics and links to bonus music (including a live recording from 2008 with Rah Rah’s Marshall Burns on guitar). All proceeds from Triumph, Reign go to Briarpatch Magazine, so you can feel pretty good about yourself as you get plastered on cheap wine in your abandoned squat, you punk. /Aidan Morgan

Ever since Tammy Wynette spelled it out in her 1968 single “D.I.V.O.R.C.E.”, the divorce album has become a staple in pop music, giving us ’70s classics like Fleetwood Mac’s Rumours and Bob Dylan’s Blood on the Tracks. Nowadays, everyone does one — from Beck to Nick Cave to Buck 65, and even sleazy old Robin Thicke. It wouldn’t surprise me if a few songwriters only got married in the first place for the wealth of material springing from the inevitable divorce.

The Wastes, by Economics (the stage name of Saskatoon synth-pop craftsman Dean Summach), adds a few new wrinkles to the genre. It’s darkly danceable, creatively ambitious and has an added layer of emotional complexity thanks to the first track, “We Didn’t Make It”, a collaboration with Summach’s ex-wife Sheena Greer. Greer wrote eloquently about the experience in a post on the Saskatoon blog Ominocity, titled “Talk to Me in Thunder and Lightning”. Complementary reading for a compelling record. /Emmet Matheson

Planet Eater’s self-titled debut EP slays right from the first howl of “BURN IT TO THE GROUND,” thanks in big part to the production. I can’t think of another Regina album this year that sounds this fucking heavy, with cannon-fire drumming, ruthlessly thumping bass, and at least two guitar solos that almost made me crap myself. The playing occasionally gets a bit samey (the bridge in “Making a War” sounds semi-recycled from “Collective Amnesia”), but this is metal. Sometimes you just want everyone playing in massive, shuddering unison like it’s a particularly brutal form of comfort food.

That’s not to say there isn’t inventive stuff here: it’s just not “inventive” (i.e. “super tedious”) like, say, Liturgy. It’s how the songs are put together that matters; you know the titanic groove that kicks off “Smiles Black” will mutate at some point, you just don’t know how. That it winds up sounding sort of like Sleep trying to play P-Funk is a pleasant surprise — inasmuch as something that sounds like it’s trying to cave in your skull can be pleasant, of course. /John Cameron