It’s been just over a year since the release of Close Talker’s debut eight-song LP, Timbers, but already the Saskatoon quartet has accumulated sizeable buzz around their live show. They’ve played numerous festivals, and toured across Canada and Europe –– not too shabby considering the group only formed in the summer of 2012.

On Flux, their second full-length and what will be their first studio offering to a larger audience, the group doesn’t disappoint. Their live show showcases all the noise a gang of multi-instrumentalists can make, but the record shows the band opting to exercise patience and restraint. Instead of blowing their collective loads right off the bat, they wait until at least the midway mark of a song for that.

On the first track, “Heads” –– the closest thing the group’s written to a radio-pop anthem to date –– layers of guitar follow a quiet-loud formula without ever feeling formulaic, while the vocals mould a sing-a-long. Elsewhere, the guitar-work occasionally forays into something resembling a lead line, even though Close Talker fully makes the dangerous leap into solo rock-dude territory. A large part of their songwriting charm is the combination of warm melodies and muscular rhythms that never stoop to posturing (no pun intended). This holds true even at the zenith of the album, “The Silence I”, when the band bangs out a truckload of noise accompanied by a string section.

On the flipside, the group occasionally — and needlessly — experiments with canned-sounding electro percussion in lieu of drummer Chris Morien’s full beats. And the vocals, pretty as they are, have a tendency to float at times, resulting in the lyrics getting lost.

At their best, Close Talker has made some mightily ambitious strides without succumbing to grandeur or excess. Call it good timing or good songwriting (really, it’s both), but Flux feels like it’s likely to find its way onto several top 10 lists of 2014. 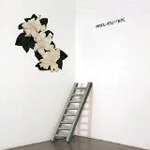 A common thread in music these days is the move from full-album to digital-single releases. There are a lot of groups out there with the type of songs that would work just fine with this approach, although they rarely follow through completely. (I’m guessing it’s too difficult to break from the album-tour-album habit and cycle.) But listening to Absolutely Free, the debut from the Toronto trio of the same name, I was struck with the thought that this is material that really, desperately needs to be presented in album form. Press releases for the record cite the songs as “movements,” and while they’re all distinct songs, the word is definitely apt. In their post-chillwave, loosely psych-pop music, they churn through moods and themes. Moments are interesting in themselves, but they’re also always setting up moments to come. The penultimate track, “Vision’s”, is sublime on its own, but it’s even greater, more ecstatic and joyful, due to everything that came before it. /James Brotheridge

Stars
No One is Lost
Soft Revolution

It’s hard for me to ever fault Stars’ Torquil Campbell and Amy Millan: the combination of their voices instantly transports me to the Set Yourself on Fire era of my young adult existence. But their latest release, No One is Lost, soothes like the soundtrack to the fantasy roller-disco depicted on its cover, a glittering but vacant pop experience. True, they sound as muscular and polished as a band with more than 10 years of big shows behind them should, and Campbell soars oh-so-close to Morrissey every now and then. But they also sound weary of playing their role as a seminal Canadian pop band, as the lyrics of “You Keep Coming Up” suggest: “When you’ve got it, it’s not the way you want it to be.” /Jeanette Stewart

Because my boxing knowledge mostly comes from a childhood love of the Rocky movies –– I still have the VHS box set to prove it –– I can’t talk with any expertise at all about actual punch combinations. As far as metaphorical ones, however, I can definitely say that they don’t come much better in 2014 than Purling Hiss, who opens Weirdon with “Forcefield of Solitude” followed by “Sundance Saloon Boogie”. The first is a spot-on, perfectly rough-around-the-edges bit of power pop. The second is miles away from the first, with the singer taking on one of those delightfully dumb fake British accents some American punks rocked decades ago. At its best, Weirdon, the second full-length from this Philadelphia group in as many years, pulls disparate elements into something great. Sometimes they lose control of the mess, but even that is never less than interesting. /James Brotheridge