A great Canadian director hates the word “legacy.” Too bad 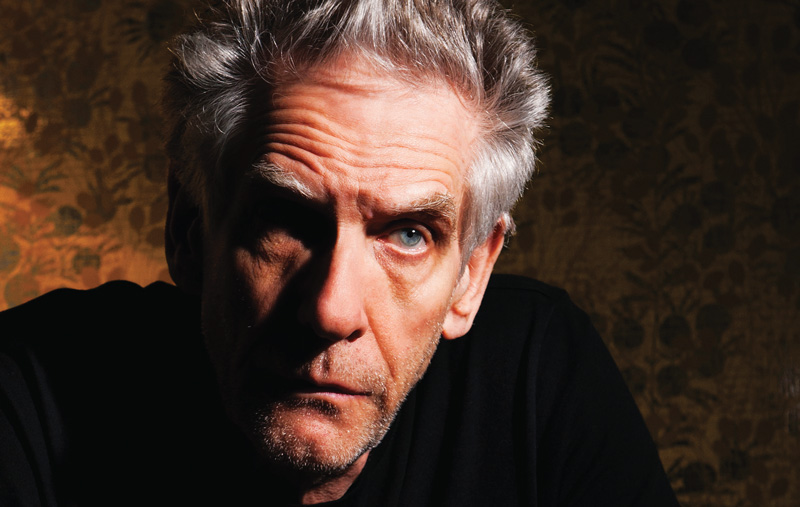 After one of the last questions I offered up to David Cronenberg, he made a cross sign with his fingers. Dammit: I’d almost made it through, but now I’m in demon territory.

All I’d asked him is if he’s ever concerned himself about his legacy — and the reaction he gave should be evidence enough that no, he doesn’t much care.

Cronenberg has long been known as one of the most brilliant, visceral and thoroughly indie horror filmmakers in history. But over the last decade, he’s also turned into an elder statesman of sorts, with actors from around the world lining up to work with him. Take Robert Pattinson, who could’ve named his ticket in any movie made by anyone following his Twilight stint. What Pattinson chose was back-to-back movies with Cronenberg.

Maps to the Stars is dark and biting, and yet it’s also the closest Cronenberg has ever come to comedy. The script, by Bruce Wagner, has been on Cronenberg’s to-do list for almost a decade, waiting for financing, while a running series of updates has been employed to keep the story current.

In person, David Cronenberg is gentle and soft-spoken, perhaps somewhat unexpectedly given the number of nightmarish scenarios he’s given us over the years. Or, maybe not.

Have you experienced the toxicity you depict in Maps to the Stars first-hand?

I have no particular desire to attack Hollywood and I don’t see the film that way. Hollywood doesn’t owe me anything. Most of my movies have been co-productions between Canada and Europe. On the other hand, over 40 years of filmmaking, I have spent time there. I’ve had many meetings with studio heads and network executives, some of which were more ridiculous than anything you see in the movie. Maps isn’t a satire, it’s reality.

About the basic absurdity of the human condition?

It’s not unique to Hollywood — any human endeavour has those aspects, whether it’s on Wall Street, in Silicon Valley or in Dilbert, which I love. I don’t have that [Dilbert] experience — life in a cubicle with a pointy-haired boss over you — but the absurdity of it is real.

I imagine the cast had their fair share of experiences to draw from.

They knew the reality of it all. John Cusack said to me, “I was [the child-star character] Benjie,” because he was a child star. I don’t know if he did as much crazy stuff, but he could relate to the pressures of being a young person making a lot of money and having so much power before being mature enough to handle it. A lot of people thought the character of Benjie was based on Justin Bieber. When the script was first written, Justin Bieber wasn’t even born!

How attached was Bruce Wagner to the script? Were you able to take liberties?

He was on set every single day, not to protect the script and complain, but to learn. If I’m directing, I have complete control. That’s something I wouldn’t have in a studio movie. Sure, financing is hell, but on set it’s great. When I was doing Cosmopolis, Robert Pattinson told me he had never seen anything like this, meaning making all the decisions on the spot and carrying them out. In a studio movie, if you want to change the colour of someone’s sweater, you get on the phone, argue with an executive, fire the costume designer, and go through all kind of traumas. I’ve never had that experience, part by luck and part by design.

Actors often state how much they like working with you, and they seem to mean it. What do you do that others don’t?

First of all, I’m very sweet. I’m very Canadian. I don’t believe in humiliating actors and breaking them down to get a performance. It doesn’t help them at all; it makes them weak. I keep a pleasant, entertaining set in which everybody is humorous and collaborative. Everybody is listened to — actors love it when you notice them. They tell me a lot of directors are so involved in the technology, the lighting and the extras in the background, they barely notice how the dialogue is being delivered.

Besides Maps to the Stars, David Cronenberg has just released his first novel, Consumed, which chronicles the descent of two freelance journalists into sexual perversion, crime and desecration of the flesh. Sounds like the Cronenberg we know and love!

Consumed has been described as your return to “body horror”. Is that a term you dislike?

I don’t see Consumed that way; it doesn’t feel like anything I could have written when I was young and making horror films. When I started [writing it], it was like I had never been a filmmaker. “Body horror” isn’t my term, but it stuck, and now I’m the creator of the genre. Also, I never felt I’ve turned my back on horror or sci-fi. It’s just that most of the projects I get offered now are so influenced by my own movies that they feel like remakes, and that’s just boring. I would have made A Dangerous Method and Dead Ringers much earlier if I had the money — [and] had it happened, they would have changed people’s perception of me. It’s random: you do whatever movie you can get financed.

So you don’t think about your legacy when you plan your next move?

Maps To The Stars
Opens Friday 31

Even at his most inaccessible (Cosmopolis) or dense (Spider), there’s always something to watch in David Cronenberg movies. In Maps to the Stars, it’s the price of fame.

Cronenberg’s portrait of Hollywood makes the place seem toxic. If it’s accurate — and why wouldn’t it be? — it’s a miracle anyone is willing to live there. In Maps, L.A. dwellers seem like the kind of people who need fame than oxygen, and their self-worth is proportional to the number of times they’re mentioned in the trade papers.

The problem with this approach is that Cronenberg leaves the audience adrift. I’m not saying there has to be a likeable character on screen at all times, but we need a reason to keep going: a character arc, a compelling mystery, the possibility of comeuppance — something, anything, to hold on to. In Maps to the Stars, every individual is as shallow as they come, and no one ever learns anything from their ordeals.

At the centre of Maps to the Stars is the Weiss family. The father (John Cusack) is a self-help guru who can’t forge a personal connection with anybody, especially his children, while the mother (Olivia Williams) is a cutthroat agent. The real moneymaker at the Weiss household is son Benjie, a child star who makes Lindsay Lohan look like Malala Yousafzai. Things really go to shit with the arrival of Agatha (Mia Wasikowska), a physically scarred girl who becomes the personal assistant of an aging movie star (a superb Julianne Moore). The characters bounce off each other. Damage ensues.

Cronenberg is perfectly aware of the Hollywood clichés in the film (actors struggling to get a part, teens behaving badly, crippling insecurity across the board), but he’s interested in his characters and their empty, empty souls. There’s no moral here — the filmmaker just makes us watch them squirm while pursuing a vapid notion of personal fulfillment they fail to even enjoy. In the end, Maps to the Stars is surreal, and often darkly funny, but not particularly insightful.