Fed Up takes down the eeeeevil corporate food industry 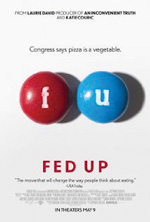 Fed Up exemplifies why documentaries are the one film genre we can’t live without at the moment: it includes large amounts of information the government and the food industry would rather keep quiet, and which the media, generally speaking, won’t touch with a 10-foot pole.

Katie Couric spearheads a fascinating exposé about the links between processed foods and the so-called obesity epidemic that’s ravaging America (don’t get cocky, Canada: we’re just as exposed). Spoiler ahead: Calories are just the red herring. The main villain is sugar.

The film starts by bringing down two longstanding beliefs food conglomerates have been pushing for the last 30 years. One: exercise can defeat obesity. Two: A calorie is a calorie is a calorie. The scientific studies that support those conclusions have been financed by special interests, covering for the damaging effects of the white stuff on the general population’s health. The tobacco industry used the same strategy for decades until became unsustainable.

Americans intake of sugar has doubled since 1977 and, not coincidently, type-2 diabetes has skyrocketed. So-called diet- or fat-free products are actually awash in sugar and substitutes (otherwise they would taste like crap). The substance is more addictive than cocaine and makes you believe you’re still hungry.

The message we hear: “one calorie in, one calorie out”. But Fed Up says your body processes those calories in entirely different manners depending on their origin. And calories from sugar and sucrose substitutes are responsible for the accumulation of fat.

This is just the cornerstone of Fed Up. The doc keeps its anger-making statements grounded by following three teenagers who struggle with obesity. The kids are constantly bombarded by the media with messages that diminish their self-esteem and makes them crave sugar. In addition, the school system serves them junk and their health is already starting to deteriorate.

The kicker? The U.S. government is subsidizing the epidemic by bailing out milk farms that produce too much cheese.

We are also witness the power of food industry lobbyists who prevent the American government from taking decisive action (any initiative is decried as the “nanny state” at work). These shadowy forces’ highest achievement: get the U.S. Department of Agriculture to declare pizza a vegetable. Let that sink in: pizza. A vegetable. Also, have you noticed how in the food labels there’s no info regarding the “daily value” of sugar? That’s by design, otherwise people would find out a single food item could feasibly cover all their daily sugar needs (six to nine spoonfuls top).

Among other myths that fall thanks to simple investigation, you’ll find that eating healthy is not more expensive than ingesting junk.

The documentary is so rich in valuable information, you would be wise to bring pen and paper.

I swore off soft drinks after watching it. It’s that persuasive.