The Lobby is fine but it could become something special 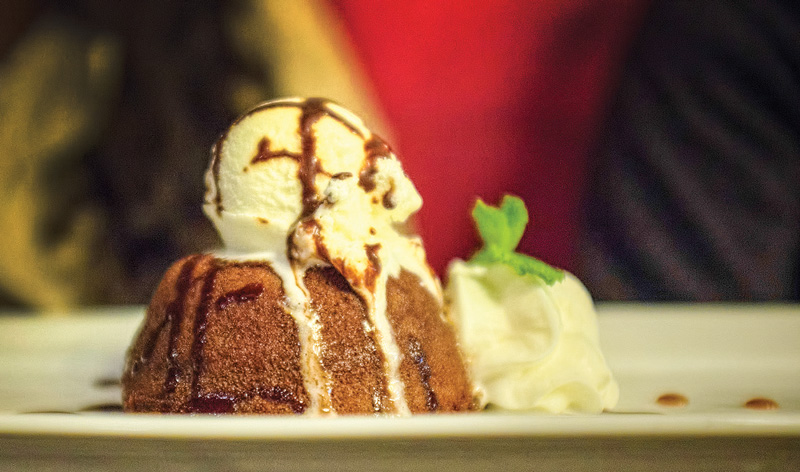 As Regina continues to boom and billow outward into the increasingly affluent city we’ve all come to love, new restaurants keep popping up to fill out nearly every conceivable space. One day we’ll have falafel stands in our closets and bistros in our basements, but for now we make do with restaurants showing up in corporate lobbies and other intriguing spaces.

The Lobby Public House, located on the ground floor of a condominium complex on Broad Street, is one of the latest in the new generation of eateries to go after the new surfeit of income and appetite in Regina.

The Lobby’s walls are festooned with black and white enlargements of celebrities, from Natalie Portman and Matt Damon to O.J. Simpson (probably not a good choice, unless wife murderers are in The Lobby’s demographic). The effect is a strange mash-up of ’50s nostalgia with modern-day faces inserted into frames where, typically, James Dean and Marilyn Monroe slouch or hold down their dresses.

Without question, the bright red couches and stools in the corner are the prime spots for lounging and getting happily drunk on a late Saturday afternoon. On our first visit, we ended up next to a party of bros stuffed into plaid shirts and white V-necks. The bros called for round after round of shots, greeting each platter with the whoops of people for whom legal alcohol is still a novelty. At first we tried to shout over them. Then we adopted a kind of hybrid language of shouts and gestures. Eventually our eardrums gave up altogether and we stared into our pint glasses, hoping that the next round would put them into a stupor.

Someone at our table typed in a snarky tweet about noise at The Lobby. Within 10 minutes, a manager emerged to apologize for the racket. He let us know that they were planning to install baffles to absorb some of the excess noise (which they appear to have done). We were impressed with the restaurant’s level of responsiveness (not to mention bro-mitigation skills) and vaguely ashamed at being caught out for being passive-aggressive jerks on social media. And the baffles probably do a good job of cutting noise down to manageable levels on one of The Lobby’s Soccer Saturday events.

The scallops were cooked perfectly and offered just the right amount of resistance. By contrast, the bacon was overdone and felt like an afterthought. A drizzle of peanut sauce on the scallops worked better than I thought it would, although I prefer something sharper to go with the umami overload of scallop. The lager chips had a nice texture — crispy on the edges and toothsome at the centre — but the cracked pepper and lime flavour didn’t really materialize. The side of tzatziki was a great idea. I didn’t get a chance to taste the samosas, but I heard no complaints from the table.

One of the Knights particularly loved the dried ribs and hazarded the opinion they were some of the best ribs in town. Certainly they were grease-free and presented with a good deal more flair than other places. The menu also indicated that the ribs were “gluten-friendly,” which is not the same thing as gluten-free. Celiac sufferers take note.

My appetizer-fuelled enthusiasm waned a bit as we tucked into the main dishes. The grilled tofu pad Thai bowl, which was mostly angel hair noodles, was a flavourless imitation of its namesake. The cacciatore had house-made gnocchi, which was pretty good, but the sauce was unremarkable. The smoked habanero beef chili, heaped with sour cream, had a little bit of heat but carried only the faintest taste of habaneros. Which is a shame, because habaneros, beneath their heat, are freaking delicious.

The Lobby steps it up a bit for the butter chicken, which I tried and found very satisfying. It may not be the best butter chicken in town but you could do much worse if you have a hankering for the stuff. I only managed a bit of the crispy southwest chicken, stuffed with roasted jalapeno cheddar, before it disappeared altogether, but the Knight who ordered the dish found it tasty, particularly the mango coleslaw. The accompanying lager chips were supposed to have a Cajun flavour but tasted plain.

As per usual with Regina restaurants, The Lobby had some excellent desserts. The featured gluten-free (not -friendly) dessert ($6.50) was a chocolate bacon brownie. Our waitress went to some pains to emphasize that the flavours worked well together but we needed no reassurance. Bacon and chocolate are the Tony and Maria of dessert ingredients — they’re from different camps but if you lock them in a room together and deny them food or news of the outside world for a couple of weeks they get along smashingly. Sorry, that sentence went somewhere unexpected.

Overall, I’m a bit divided on The Lobby. I liked the prices and the presentation, as well as the gesture towards gluten-intolerant customers, but the food feels timid. Also, the large drink offerings are branded as “Executive Size”, which feels like naked pleading. The menu carries a soft-focus version of world cuisine with a pan-Asian emphasis, but most of it is toned down and calibrated for maximum inoffensiveness. It’s food designed to accessorize your Lobby experience and provide a general memory of cuisine, in the same way that hotel room art hangs on the walls to fortify the idea of homeyness.

But the Lobby has a solid base on which to build. I’d love to see what they could do if they took a chance and turned their menu into the real draw.

WHAT IS IT? The Lobby Public House

WHAT DOES IT DO? Lunch, supper, drinks, and Saturday morning breakfast for soccer events.

WHAT SHOULD I ORDER? We liked the salt and pepper dried ribs, bacon-wrapped scallops (with some reservations), the crispy southwest stuffed chicken and the gluten-free dessert.

ANYTHING ELSE I SHOULD KNOW? Kate Upton kept staring at me from the wall while I was trying to eat. It felt weird.