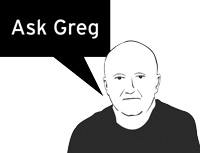 The CFL always promotes itself as being different from the NFL, so here’s an idea, Greg: let’s switch our national football to metric! Think about it: Canada adopted the metric system in the 1970s, yet in football we still use imperial measurements. If you do the math, a 100 metre field is only two feet shorter than a 110 yard field. Convert the end zones and field-width to metric too, and presto! True Canadian football using our national system of measurement.

What do you think?

On a macro scale, Dave, your idea has merit. But when you get into the nuances of the game, there are problems.

To get a first down, a team must gain 10 yards. If you switched to 10 metres, that would be a kick in the nuts for the offence, which would now have to gain almost a whole extra yard. True, the defence would be required to line up a metre off the ball, which would give the offence more room to operate. But I don’t know if that would compensate for the increased first down yardage. If it didn’t, offences would have trouble sustaining drives, and that would hinder the wide-open style of football the CFL prides itself on.

You could decrease the first down requirement to nine metres, I suppose. But then the defence takes a hit as the offence would have to gain six less inches for a first down. Yeah, that would lead to more offence — which can be exciting. But do you want to see the CFL turn into Arena League North with teams regularly scoring over 60 points a game? I know I don’t, Dave. Besides, if you went with nine metres, you’d break with the base five symmetry of football.

That’s especially true when it comes to penalties. At present, pigskin justice is doled out in five-yard increments. Translate the traditional five-, 10- and 15-yard penalties into metric and the stakes become a lot higher. A 15-metre penalty, for instance, is 15 per cent of a 100 m field whereas a 15-yard penalty is only 13.6  per cent of a 110 yd field. That could really fuck things up.

Sorry, Dave. The more I think about your idea, the worse it gets. I’m going to have to put the kibosh on it.