Trevor Herriot steps out to ponder our messed-up civilization 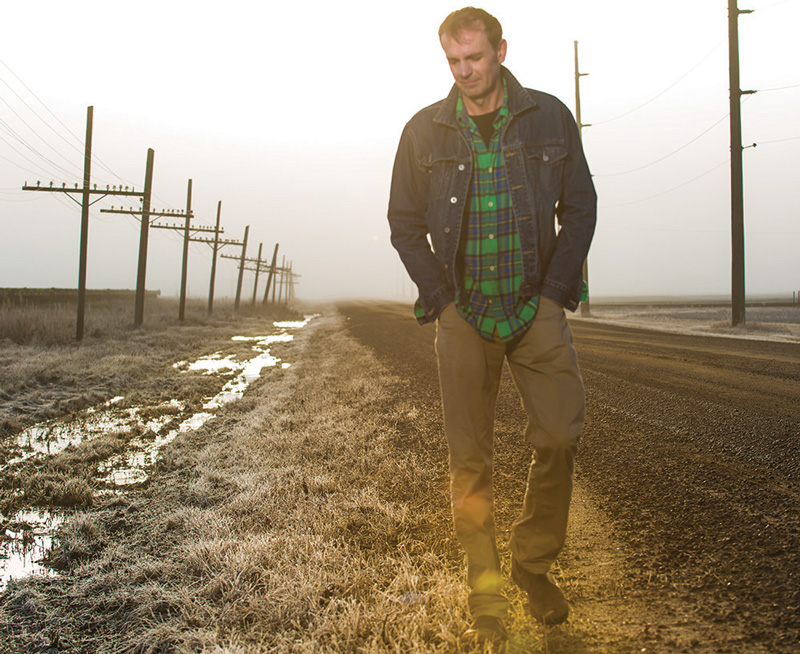 Trevor Herriot
Book launch: The Road Is How: A Prairie Pilgrimage Through Nature, Desire, and Soul
Royal Saskatchewan Museum
Thursday 15

From the first cavemen on the hunt to Henry David Thoreau, from The Canterbury Tales to Gandhi’s walks to the sea protesting the salt tax; from Dante’s journeys through heaven and hell to the Australian outback’s custom of the “walkabout,” no activity is as human as going out for a walk. It’s therapy — mentally, physically and spiritually.

But for most people in this province, Trevor Herriot’s favourite activity — going out for a hike — is a foreign concept. Our cities are built for car travel, not public transit or cycling or even (heaven forbid!) pedestrians.

So Herriot’s latest book, The Road Is How: A Prairie Pilgrimage Through Nature, Desire, and Soul, was probably a tough sell to his Toronto publishing community. It’s one thing for an author to offer up a book about hiking along natural or historical trails — like the Bruce Trail in Ontario or the Pacific Coast Trail on the west side of Vancouver Island — but this? “That’s right boss, Herriot’s latest book is about a three-day hike along the gravel roads and something called road allowances south and east of Regina. I know. God’s own pool table. Maybe that gainer he took off the roof of his house did some brain damage, if he thinks this will sell …”

But a good walker knows not everything can be found with a cellphone’s GPS. Herriot was — and maybe still is — searching for something that he may have knocked loose when he hurt his left side in that fall a few years ago. (He says he’s still feeling the after-effects, though he adds that yoga has done wonders to help him heal.) Or maybe it’s a crisis of faith? Existentialism? The fact that he’s got more time behind him than ahead of him?

“As we get older, more mature, less romantic, less nostalgic, we take on that tone,” Herriot says in an interview. “I was 40 when I wrote my first book; I’m 55 now.

“Why not turn the focus inward? Turn the telescope around?”

But the view taken in The Road Is How isn’t so much from a telescope as it is from a kaleidoscope. Herriot looks at, and writes about, nature through the prisms of not just environmentalism but also history, spiritualism (Catholicism, some aboriginal spirituality, a tinge of new-age here and there), philosophy and psychology. Most people in Saskatchewan look at life through a windshield — in tractors, pickup trucks or other passenger vehicles. Herriot asks: what are we missing by isolating ourselves in that glassed-in, high-speed and air-conditioned world?

The Road Is How probably won’t have the same cultural impact that his first piece of Saskatchewan nature writing, River In A Dry Land, had when it was released 15 years ago. That’s too bad, since Herriot is a much more accomplished writer today. But River in a Dry Land captured the zeitgeist of a time and place that has moved on, in a different direction. The people who came to settle Saskatchewan after the transcontinental railway passed through the plains didn’t come to live with nature, they came to dominate and exploit the land. There’s ranching, especially in the southwest, and there’s still a few parts of the Prairie Farm Rehabilitation Agency pasture system around (although they won’t be in a year or two) — but overall, Saskatchewanians feel that if you can’t drag an air-seeder over top of it, or dig or pump stuff out of it, then what good is it?

The problem, Herriot admits, is that nobody’s truly innocent. “I benefit from this messed-up civilization as much as the next person,” he says.

“Because we’ve become attached to things that the oil industry supplies and the economy it produces, in our addictiveness, [we should all be] worried. Where is this going to go?”

If science is being held captive to engineering and capitalism — as we’ve seen with the Harper government’s wholesale commitment to environmental degradation in the name of resource extraction — why did we let it happen? And if one day we get deadly serious about saving the environment, then what and whom are we saving it for? For another generation to maybe make an even bigger environmental hash of it than we are creating now?

That’s why Herriot argues that while science is an important part of finding our way out of our environmental crisis, something else is needed as well.

If River In A Dry Land was a history lesson, The Road Is How is more like internal psychoanalysis. But while political scientists argue that the personal is the political, Herriot stands the axiom on its head: what is it about modern consumerist society, for example, that makes the male of the human species into an immature jerk? Herriot argues that we — or at least the ruling class, the people whom marketers representing everything from beer companies to grocery stores to political parties target — suffer from affluenza. We have too much of everything, and consequently we know the value of nothing, whether the object of our intention is food, real estate or sex.

There may be some pagans and Druids (not to mention hedonists who are also environmentalists) who would beg to differ with Herriot, and the argument isn’t fully developed. But the debate, much like the journey he makes in this book, is interesting not as much in its destination as in the route it takes.

Like Herriot, people who love to go on walks often don’t know exactly where they’re going. But we’ll never get anywhere unless we take the first step.

Award-winning Saskatchewan author Trevor Herriot launches his new book, The Road Is How, on Thursday May 15 at the Royal Saskatchewan Museum at 7:30 p.m. Includes a reading and discussion on walking and the human spirit with photographer Dennis Evans.