Look Out! He’s Got A Hammer! 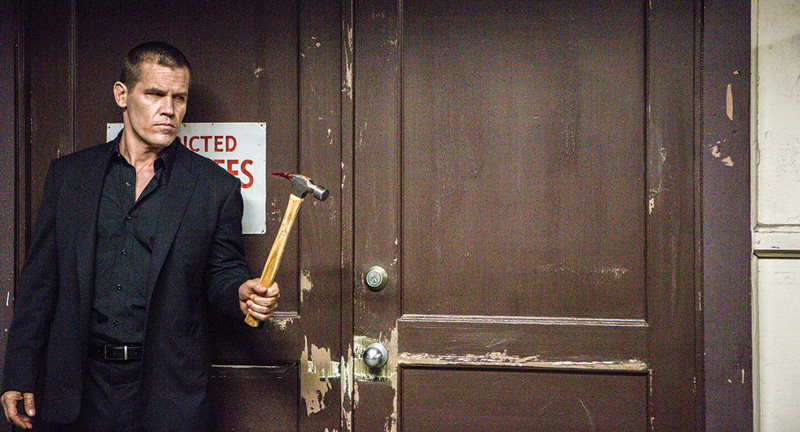 Spike Lee is a craftsman who happens to dedicate his talent to causes dear to his heart. On the rare occasions Lee has ventured outside the African American experience — The 25th Hour, Summer of Sam — the results have been outstanding. The filmmaker approaches these stories from a crooked point of view, a strategy that brings up hidden truths.

The Oldboy remake is an odd beast. Lee is ostensibly a director for hire (it’s not “a Spike Lee joint” but a “film”), but he strives to make the material his own. Unfortunately, it looks the same people who put him in the driver seat undercut him on regular basis. The outcome is 100 minutes long and ostensibly choppy, as if the studio wanted to make it shorter and punchier (and Lee was reportedly overruled in at least one key sequence).

The setup is the same as in the Park Chan-wook film. An unpleasant ad executive (Josh Brolin) is framed for the murder of his wife and confined to a dingy hotel room for 20 years for reasons he can’t begin to fathom. Without explanation, he is set free, but his movements are as predetermined as they were while in captivity. In his quest for answers, the bloke is assisted by a compassionate nurse (Elizabeth Olsen) with a soft spot for broken blokes.

The less you know about Oldboy, the more you are likely to enjoy it. Know that Josh Brolin goes for broke as the often loathsome protagonist and Samuel L. Jackson spews a litany of curse words and not much else. But the movie really hangs on Sharlto Copley’s depraved villain. His affectation is distracting until you realize it exists just to disguise some serious moral decay.

The set-up and the conclusion are up to standard: Lee treats us to some visual flourishes not seen since Inside Man. The investigation, however, is not even Law & Order-worthy. Those who saw the Korean version of this story (which began life as manga) will enjoy clever variations on some iconic sequences (the off-the-books prison gets a lot of attention), but overall might be turned off by the hastiness of the proceedings.

Hey, go see it and tell me what you think.

Out Of The Furnace
Opens Friday 6

Quietly, Scott Cooper has emerged as an interesting new voice on the fringes of the Hollywood machine. Cooper first gained notoriety by directing Crazy Heart, which won Jeff Bridges an Oscar. Along with Bridges’ superb work as a washed out country singer, the film dug into the roots of self-destructive behaviour, providing a welcome hint of darkness to an otherwise ordinary redemption flick.

The same gloominess is front and centre in Cooper’s latest film, the affecting drama Out of the Furnace.

Christian Bale stars as Russell, a steel mill worker who’s carved out a relatively decent place for himself in the economically depressed American northeast. He’s got a doting girlfriend (Zoe Saldana), a reliable source of income and enough self-delusion to accept his place in the world, as lowly as it is.

But misery is just around the corner thanks to Russell’s brother, Rodney (Casey Affleck), a gambling addict and veteran of multiple tours in Afghanistan. It doesn’t take long before Rodney runs afoul of the sinister Harlan DeGroat (Woody Harrelson), head of a vicious bare-knuckle boxing ring. Suddenly, Russell is ripped out of his comfort zone and forced to deal with the same threats he’s spent his whole life trying to avoid.

While Russell, Rodney and Harlan seem like stock characters (and perhaps a tad too good-looking for this environment), each one is given a particular spin that makes them gripping. You can feel Russell’s transformation as every source of solace is stripped away from him, even though Bale underplays his tragic circumstances. And it’s hard to judge Rodney for his gambling habit: here’s a man trapped in a war-themed groundhog day who hopes one big win will save him from another trip to Kabul.

Most interesting is Harrelson as the villain: he’s got both the brains and the means to get out of this depressed area, yet he prefers the company of meth-heads and fallen men consumed by desperation. Harlan is the embodiment of the dangers of a narrow mind: money isn’t a springboard to something more, it’s an end unto itself. After years of serving as comic relief, Harrelson’s performance here reminds us just how menacing he can be (shades of Natural Born Killers).

The unavoidable mano-a-mano between Harlan and Russell transcends a mere settling of the score: it starts as good versus evil, but in the heat of the battle one reshapes the other.

Cooper’s portrait of the Rust Belt is damning, yet rooted in reality. The very few jobs available are either perpetually threatened by cheaper alternatives abroad or they’re physically gruelling and mentally numbing, like coal mining. Education isn’t an option and culture doesn’t exist.

No wonder crystal meth flourishes in this environment.

Animation has experienced a bit of a renaissance lately, as films like Wreck-It Ralph and Tangled have sparked new life into the company after a rather unremarkable decade. (Remember Bolt? Meet the Robinsons? Anyone?)

Frozen is an effort to bring back the musical component that turned so many Disney movies into classics, but the outcome is a far cry from Beauty and the Beast — or even Tarzan. The goofy, rudimentary songs featured here make you yearn for the days of Alan Menken.

Loosely based on “The Snow Queen” by Hans Christian Andersen, Frozen simplifies the tragic fairytale and imbues it with all sort of comedic elements. And the Queen isn’t even the star: that role goes to her hyperactive younger sibling Anna, a plucky girl who can’t understand why her sister keeps her at arm’s length (hint: She’s a cross between Iceman and Cyclops). When the ice hits the fan, it’s up to Anna to rescue the realm from the permafrost that covers it.

Frozen looks gorgeous, but it left me cold. Along with overly earnest songs (“Fixer Upper”, “Reindeers Are Better than People”), directors Chris Buck and Jennifer Lee force as many Disney-style clichés as possible into the story. (Sure, Olaf the Snowman is somewhat amusing, but Frozen already has more than enough comic relief.)

The mildly entertaining effort leaves the audience with two lessons — one obvious and the other highly questionable: First, it’s seldom a good idea to get entangled with the first sucker that crosses your path (duh). Second, people need other people at all times — so apparently if you enjoy your own company and happen to find those around you less than interesting, there’s something seriously wrong with you.