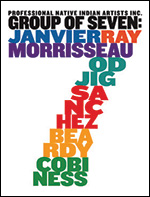 Even Canadians with zero interest in art have likely heard of the Group of Seven, the iconic group of painters from the early 1900s who, through their haunting depictions of the wilderness landscape, are credited with creating a unique Canadian artistic vision.

They likely wouldn’t be able to identify any of the members by name, but they’d almost surely have heard of them.

That’s a reality that’s cheekily addressed in the title of this exhibition curated by Michelle LaVallee about another group of seven artists who were active in Canada for a time. Like the Group of Seven, they created great art, but they are much less well-known and appreciated.

The artists in question met in Winnipeg in the late 1960s — working informally together at first, and in 1974 forming Professional Native Indian Artists Inc. Two were born in the U.S. (Eddy Cobiness and Joseph Sanchez), three in Ontario (Carl Ray, Daphne Odjig, Norval Morrisseau), and one each in Manitoba (Jackson Beardy) and Alberta (Alex Janvier).

Recognize any of those names? When LaVallee was growing, she says, she didn’t.

“Through my education I may have seen a couple of Norval Morrisseau images, but other than that, surprisingly, and unfortunately, I did not have access to these artists,” LaVallee says. “[In recent years] there’s been some movement to correct that. But it hasn’t gone far enough, and I suspect even today these artists aren’t part of official Canadian art history, and certainly not with the prominence I think they deserve.”

Correcting that oversight was a driving force for LaVallee in curating 7. She was especially inspired to do the show after meeting four of the artists — Odjig, Janvier, Sanchez and Morrisseau — in a two-week period in 2007. “That made me wonder: how come we don’t know about this history? Why aren’t there books about these artists, or major exhibitions? It was so incredible what happened.”

By any measure, 7 is a major exhibition, featuring 120 works by the artists from the decade they were together in Winnipeg. Securing funding three years ago, LaVallee says, “enabled me to do full-on research, visit collections, talk to colleagues.”

“I wasn’t alive when this group was operating, so it was important for me to talk to the artists and spend time with people who were there,” she says.

Art is front and centre in 7, but there’s a healthy dose of politics too. “It was a turbulent time,” says LaVallee. “There was a lot of activism around land rights and other indigenous rights, and that was the experience of these artists. So that’s obviously reflected in their work.

“Also, from an arts perspective, Daphne, Joseph and Alex have all spoken about how indigenous artists were framed as craftspeople. That was really limiting for those who wanted to be recognized as contemporary artists. Alex talks about how they were offered a show at the War Museum. That infuriated them because they were tired of being relegated to museums and hallways and offices. They weren’t in the major fine art institutions.”

With one exception. In 1972 Jacqueline Fry curated a show called Treaty Numbers at the Winnipeg Art Gallery that included Odjig, Beardy and Janvier. But outside of that, and some private sales to collectors, pickings were slim.

Beardy and Janvier had some academic training as artists, while the others were largely self-taught. Reflecting their diverse birthplaces, they also had different First Nations affiliations ranging from Cree to Ojibwa, Dene, Saulteaux, Pueblo and more.

Asked how the artists came to congregate in Winnipeg, LaVallee says, “the sense I get from them is that Winnipeg just seemed to be the place to be at that time.”

The artists coalesced as a group when Odjig and husband Chester Beavon opened a craft store in downtown Winnipeg in 1971. “Daphne’s shop provided a place to meet, critique each other’s works and exhibit,” says LaVallee.

“They proposed incorporating in 1973, and did in February 1974,” she adds. “They exhibited full-on together for a couple of years; then they started exhibiting with other artists. Then as some of their solo careers took off, they began focusing inward on themselves more. Daphne moved away, Alex was already in Cold Lake. They didn’t officially disband, but the group did dissipate.”

Just as Tom Thomson and Emily Carr are considered satellite members of THE Group of Seven, other aboriginal artists were part of the mix in Winnipeg.

“On paper there were seven, but many other artists would’ve passed through Daphne’s gallery,” says LaVallee. “Some may have thought about joining, but didn’t for various reasons.”

The artists showcased in 7 deserve recognition for the role they played in the renaissance of aboriginal arts activity that’s occurred in Canada in the last few decades, says LaVallee.

But their importance extends far beyond that.

“Their indigenous heritage obviously comes through, as it does for any artist, regardless of background,” says LaVallee. “Your heritage informs what you do, sometimes whether you want it to or not. A couple felt strongly that they wanted to document the stories and culture for future generations.

“But I see it beyond the boundaries of an indigenous framework. I definitely think it’s a huge part of Canada’s cultural heritage. It reflects this land like nothing else, so that’s the bigger picture I’m hoping people walk away with.”

Once 7 closes at the MacKenzie in January, it will travel to the Winnipeg Gallery, then on to Kelowna and Thunder Bay, before ending its run at the McMichael Gallery in Kleinberg, ON in January 2015.

After that? LaVallee would love to see the show tour internationally.

“It’d be well-received in Europe, I think, and it would resonate well in Australia and New Zealand. They have senior groups in their indigenous art histories too. Unfortunately, it costs a lot of money to move shows.”

A hardcover, 350-page full-colour catalogue is in the works, though, with essays by seven First Nations curators. It should be available Feb. 1. And the recognition it will bring the seven artists is richly deserved, says LaVallee.

“As individuals and a group, they served as a source of inspiration for succeeding generations,” says LaVallee. “They did what they set out to do.

“They gained recognition from fine art institutions that had previously refused them entry. They challenged people’s preconceived notions of indigenous people, their art, and everyday lives.”