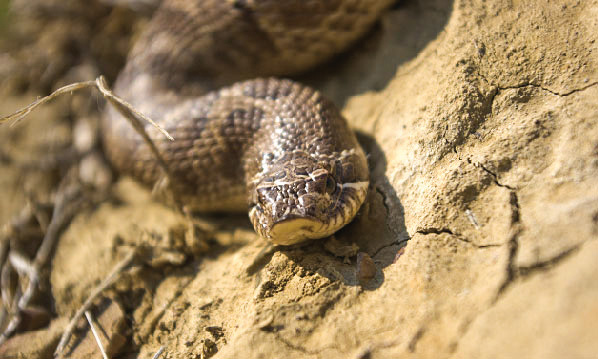 This summer, teams of university students under the direction of the Royal Saskatchewan Museum fanned out across south-west Saskatchewan. Their goal? To learn about some of the province’s less-well understood creatures.

It was called bio-blitz. And it went great.

“We were targeting many different taxa — snakes, small mammals, lizards, butterflies and bees,” says Ray Poulin, the RSM’s manager of research and collections. “It was a broad survey, which separates it from other projects that’ve been done in the past. Often, the focus is on a specific group or place. Here we focused on many groups over a large area.”

“Most bio-blitzes I’ve been involved with take place over a 24-hour period in a small area,” adds Cory Sheffield, RSM curator of invertebrate zoology. “Ours was all summer long, which enabled us to recognize temporal variation in species. With insects, for instance, some are only active in the [early summer] while others are active [later on]. So that made this survey unique too.”

While the RSM was the main organizer, there were many other federal and provincial partners related to wildlife management, agriculture and parks. Teams were dispatched to areas including Grasslands National Park, Cypress Hills and the Big Muddy Valley.

“Students were stationed in these locations through the entire summer,” says Poulin. “They would work with the landowners and other locals, who were great. You want to know something about a place, you talk to the people who live there. That’s where we got some of our best information.”

The local knowledge was particularly important for students because the focus of their study wasn’t what, in scientific terms, are described as “charismatic mega-fauna.”

Instead, students were after what, in non-scientific terms, are described as “creepy crawlies.”

During the course of the summer, the student teams made many unexpected discoveries.

“With bees and other insects, we not only found species that hadn’t been recorded in Saskatchewan before, in some cases we had new prairie or Canadian records from these surveys,” says Sheffield.

“We discovered species of snakes in places where we didn’t know they existed before,” says Poulin. “I think we got three new species records for the east side of Grasslands National Park. There’s a species of shrew — only one other specimen has ever been reported on the prairies. There’s a species of mouse that’s endangered. The only known population is in the Suffield national defence area [in south-eastern Alberta]. It could and should be found elsewhere.”

The students did more than just collect specimens for the museum’s collection, says Poulin.

“There’s an active research program on snakes of Saskatchewan with Dr. Chris Somers at the University of Regina,” says Poulin. “We’re looking at how populations of snakes are segregated — particularly bull snakes, rattlesnakes and eastern yellowbelly racers. So every snake we got we drew a blood sample. They also tagged some bull snakes and eastern yellowbelly racers to track their movements.”

Data collected by the RSM from blood and tissue samples will be forwarded to the University of Guelph’s Centre for Biodiversity Genomics, which is a lead player in the International Barcode of Life Project which seeks to build a storehouse of sequenced DNA to aid in species identification.

“With a lot of insects we can recognize them based on their morphology like the shape of the head or leg,” says Sheffield. “But there are other groups, because they look so similar, even for people who have experience with them, they can’t tell them apart. So we [use DNA] as a tool to see which ones are genetically distinct.”

While the bio-blitz has already paid dividends for the RSM and its partners, plenty of work remains to be done. But with the completion of the survey, an important baseline has been established, says Poulin.

“I’ve lived on the prairies for 20 years, and I’ve never heard anyone say ‘Well, that was a normal year’. It’s always very hot or cold or dry or wet. So plants and animals that live here have had to adapt to these fluctuations.”

With the advent of settlement 150 years ago, Poulin adds, the Saskatchewan landscape was further altered by intensive agriculture. And that has important ramifications for the health of the environment.

“We’ve either inherited what we have now from our ancestors, or we’re borrowing it from future generations,” he says. “So what’s our responsibility for what we have? Well, before you answer that question you have to know what you have. With the information we’re gathering we’re going to be able to inform species at risk recovery strategies. Or say there’s a new species that’s never been found in Canada before. How does that impact on what we need to know about agricultural systems or pest systems or whatever?”

“Bees have been getting a lot of media attention lately,” says Sheffield. “They are pollinators, and agriculture is a big part of Saskatchewan’s economy. But we have very little knowledge of the bee pollinators here. We wanted to build that knowledge because some of the bee species here probably play underappreciated roles in food production.”

In years to come, the RSM would like to conduct bio-blitzes in other areas of Saskatchewan to learn more about the flora and fauna that inhabit all the distinct eco-systems that exist here, says Poulin.

“We’re a provincial museum so we’re supposed to have natural history collections that represent all of Saskatchewan. But it’s a big province, and it’s not easy to get everywhere. If you’re going to sample a place like Lake Athabasca, it has different logistics than going out to Bengough which is an hour away from Regina. So it’s a matter of getting organized and getting funding.”

To learn more about the bio-blitz, visit www.royalsaskmuseum.ca where you’ll find blog reports done by students during their time in the field.