Regina’s plaza is the best free parking in the city 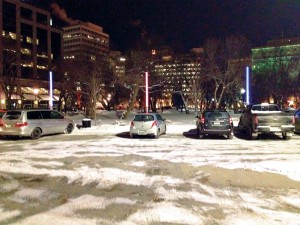 The first time I stepped onto the $7 million1 City Square Plaza, that vast expanse of Italian paving stones in the midst of downtown, I thought, “Wow, the cars are going to park all over this place.”

And as it turns out, that’s what happened.

Reports have been coming in all winter of automobiles parked in front of the benches, the lightsabers and the ice rink; and of cars parallel parked outside the Hill Tower I entrance.

In fact, an image posted to Facebook in February shows a row of 12 cars taking up the entire length of the plaza one evening.

Parking on the plaza was such a common sight I began to doubt what I knew about it being a no-parking zone. I began to think that perhaps something had changed without my knowledge.

But Kelly Wyatt, Director of Development Engineering for the city, confirms that the plaza hasn’t been formally converted into a parking lot. It’s still a no-stopping zone for cars and there is no parking allowed anywhere within it.

So why isn’t the city enforcing their parking bylaw then?

Turns out they are. According to Wyatt, the city has issued about 70 tickets so far to cars that have parked illegally there.

“Parking is always a challenge and people will always find a place to park that we’d rather they didn’t,” she says. “But this is a new one. This spring when we start to see more active uses again and people in the space for events, it starts to solve itself a little bit too. But in the winter, with not very much going on out there other than the rink, people tend to find any place they can to park.”

“For the most part, the parking seems to be the biggest challenge we’ve seen in terms of [the plaza] not being used in the way that we hoped,” says Wyatt.

Of course, one mildly annoying thing about this is that a chunk of Victoria Park was paved over to build the plaza. That means some of these vehicles are actually parked in places where there used to be grass, bushes and even trees.

It seems rather offensive, somehow.

As for strategies to combat errant parkers in future, Wyatt says the city will be looking into some new signage in the spring to make it more clear that cars can’t just go wherever they want.

Not that anyone’s asking us, but gigantic fines and towed vehicles might be a helpful deterrent as well.

Or maybe we should just give Whitworth a rocket launcher. He’d have this parking sitch fixed in no time.

1. There’s some dispute over the figures, but in a nutshell, the city says the plaza cost $6.8 million and we rounded up because that’s just how we roll.