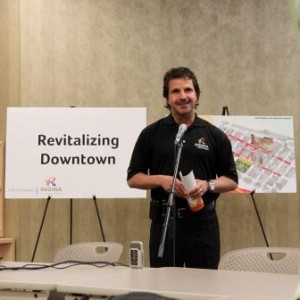 As I type, hordes of volunteers — including some city councillors and Mayor Fiacco — are downtown handing out information detailing changes coming very soon to Victoria Park and its environs.

We attended a technical briefing earlier and here are a few of things you can expect to see this summer:

11th and 12th Avenues and Lorne and Cornwall Streets will be changing from one-way to two-way. Expect the switch to happen June 12 and for two weeks prior, the lanes that’re actually changing direction will be blocked off to help drivers become accustomed to the new traffic flows. So… during the transition (tail end of May, early June), expect lots of traffic congestion downtown.

As soon as the traffic patterns are changed, construction will begin on the new 12th Avenue Plaza. The road between Lorne and Scarth be resurfaced and decorative lighting and benches will be put in place to make the area useable for festivals, special events and, next summer, the Farmer’s Market. City administration are hoping the work will be largely completed this season and the plaza will be ready to use next spring.

The city’s working with the contractors to keep the downtown accessible throughout construction and work will stop during the Folk Festival, the JazzFest and on I Love Regina Day to accomodate those events.

So, in short: long-range forecast for downtown is lots of heavy machinery kicking up clouds of dust this summer. More news on what’s planned later….