Live To Record To Live 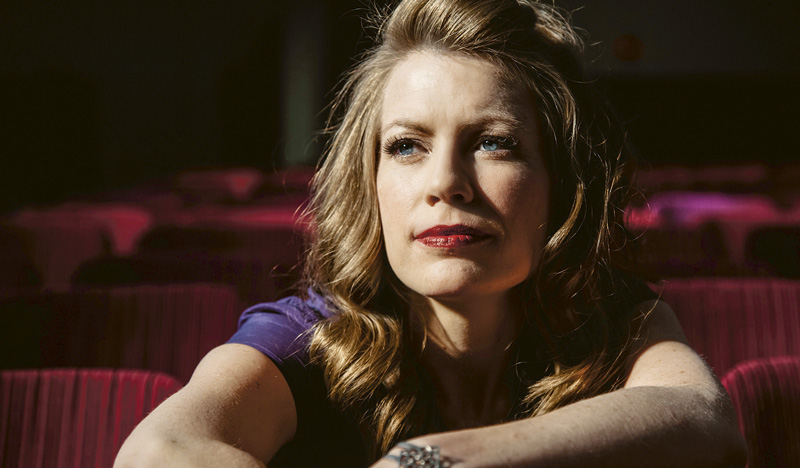 Since jumping into the music business full-time six years ago, Belle Plaine, a.k.a. Melanie Hankewich, has successfully straddled the divide between two seemingly distinct genres: jazz and country. Although she does admit it has presented challenges for her and her fans.

“My two studio albums were sculpted as groups of songs,” says Hankewich. “The EP was folk/country, then with Notes From A Waitress in 2012 I grouped songs together that had a 1940s jazz theme.”

When Hankewich performs live, she wows audiences with how seamlessly she and her band flow between the genres. Although when you dip back into their roots, she says, it’s not really that big of a jump. “There’s this uptake on the phrase ‘Americana’ in the last 10 years. That’s essentially what it is, these early American forms of music — blues, jazz, country and folk.”

Standing at the merch table after a show, though, Hankewich sometimes felt something was off. “Nothing really represented us as a live show, so when people came up to buy a CD I never felt genuine about what I was giving them and how it related to what we were playing.”

(In a very meta turn of events, The Artesian is the Regina venue for this show. It’s like The Unrequited Love has become a reflection of a reflection in one of those never-ending series of reflections you get when you point two mirrors at each other. Mind: blown.)

During the two-set show, the band played 20 songs. Eleven made it onto the album, and through the mix of originals and covers that were chosen, Hankewich feels it does a good job of capturing the vibe of her live show — a sentiment Prairie Dog seconds.

There’s even bits of stage banter where she jokes with the band and introduces songs to the audience.

Timing the recording for Valentine’s Day wasn’t intentional, she says.

“We got booked for a show in Swift Current on Feb. 15,” says Hankewich. “Shann Gowan, who runs Lyric Theatre, had seen me with a full band at JunoFest [the previous spring]. She wanted us to play as part of a concert series, so she asked me to bring the band out.”

After committing to the gig, Hankewich decided she might as well do a second show in Regina and record a live album with the band.

“When I looked at the calendar, the most logical date was the Friday before and that was Valentine’s Day.”

It was a Valentine’s Day show in name only though, says Hankewich.

“We don’t sing a lot of love songs, so I decided to make it an anti-Valentine’s show. That’s where the name for the band came from — I wanted something that was cynical about Valentine’s Day, so we called them The Unrequited Love, and that became the name of the album.”

The album opens with the original song “Advice From A Vicar” about a woman who tries to seduce a priest, and also includes a cover of Tom Waits’ sombre heartbreaker “Christmas Card From A Hooker In Minneapolis”. Kris Kristofferson’ s “Sunday Mornin’ Comin’ Down” and Jimmie Cox’s “Nobody Knows You When You’re Down And Out” are also covered, while Hankewich introduces a second original, “Frozen In Obscurity”, with a poignant anecdote about taking winter walks while caring for her mom when she was dying of cancer.

The “anti-Valentine’s Day” concert attracted people who were into the idea, along with couples who genuinely were out on a Valentine’s date, Hankewich says. But in the end, it all worked out.

Then came the hard part of taking the recordings by sound engineer Chris Haynes and mixing them at Soul Sound Studio with producer Orion Paradis.

“Going in, I had ideas about which songs I wanted but it didn’t turn out that way at all,” says Hankewich. “We listened back and picked ones we felt were performed best. With a live recording, and so little opportunity for isolation in the mikes, to go back and change things would have meant overdubs. That’s okay if you’re the Eagles, but we didn’t have that ability.”

The final step was to design the album cover. That was done in collaboration with artist Monique Blom, photographer Carey Shaw and designer Avril Biggin.

The outside features a lone coyote standing in a deserted prairie landscape. “It’s very stark, and not very welcoming,” Hankewich says. “For a while, that’s how I felt about the industry. The touring was really exhausting me, and just the amount of work it takes to put on a show when you’re self-represented. The reward at the end didn’t always seem to balance out for me to have a happy life.

“But then the inside has this warmth to it. To me, that’s what the show is and the reason I keep going. I want that communion with the audience and the warmth it creates.”

While producing the album took longer than expected, Hankewich thinks it’s an important step in her artistic development.

“I’m writing for a new album and would like to be in the studio this year so we can have something out in 2017,” she says. “But for now I just want to celebrate this album.

“I really like how it connects everything I’ve done before,” says Hankewich. “But I’m excited for what the next studio album can be because of what the live album has given me.”