Prairie Dog’s quirk chronicler has passed away. We’ll miss him. 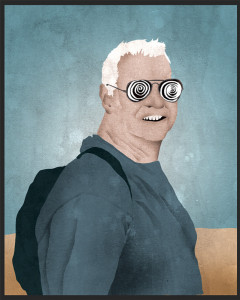 OBITUARY News Quirks author Roland Sweet passed away from heart failure on July 24 at the age of 69. His death marks the end of a journey that started on Aug. 2, 1945 in Florida — a place well known for its abundance of newsworthy human foibles. Besides writing this column, North America’s premier chronicler of human folly was a log cabin enthusiast, a Vietnam veteran, a friend to rescue dogs, a sponsor of elephants and a fan of the Washington Nationals. He is survived by his wife, Theodora Tilton, who was kind enough to share details of her husband’s life with us.

We didn’t know Roland well but he has been a pleasure to deal with since we began publishing News Quirks in 2002. We will miss him and his column, as will readers — I couldn’t tell you how many times I’ve been told “I love the column with all the crazy stories about moronic criminals.”

By day, Roland Sweet edits nice magazines about nice people who want to build log cabins in the woods. By night, the resident of historic Alexandria, Virginia (pop. 128,283) collects random bits of news for magazines like Prairie Dog.

Somehow, it seems like the right gig for a guy living in a city six miles south of Washington, D.C. on the Potomac River’s west bank. Alexandria’s economy is powered by Defense Department spending, and tourism — the kind of place you’d think would cultivate an eye for absurdity. And Roland Sweet is someone who is familiar with absurd tales. Whether it’s the little stories — like stick-’em-ups gone wrong and people shooting their faces off during firearm safety lessons — or the bigger (but still little) stories, like then-Department of Homeland Security director Tom Ridge saying duct tape will win the war on terror, Sweet is there, collecting them all without comment.

It’s a proud tradition, says Sweet, who traces his quirk-collecting lineage back to Herodotus — who chronicled ancient Greek and Middle Eastern history in the fifth century BCE.

Hello! So, who the hell are you?

I would describe myself as a guy with a short attention span and sharp scissors; someone who has always been interested in newspapers and news oddities. Many years ago, newspapers — particularly the afternoon editions — would sometimes come up short [of material], so they’d have to fill up that space with whatever they could grab. And they’d get these little oddball stories off the newswires. Those are the things I gravitated to.

Has technology changed that?

Oh, very much, yes. Firstly, the demise of the afternoon papers caused that filler need to go away — there wasn’t a lot that happened between morning and when they came out, so they used to have a lot more space to fill. Also, with computer technology, the way type is set doesn’t leave these little spaces that need to be filled.

At the same time, weird news must be more accessible now.

Yes, it’s much more accessible. The interest in news oddities has intensified largely because of the Internet. There is less scrutiny by professional editors who can attest to the veracity of some of these things, so you have a lot of urban legends and hoaxes and misstatements and things like that. That’s true of the Internet as a whole — it’s unpoliced. Maybe that’s a good thing and maybe that’s a bad thing.

Is there a sense of public service in what you do, in the sense that the mainstream press isn’t organizing this information?

I think the only public service would be someone looking at these people and saying, ‘Boy, I thought I was stupid but there’s someone stupider than I am.’

What’s the quirkiest story of all time?

My all-time favourite was about a guy named Larry Walters. He wanted to be a pilot but he had poor eyesight. So [in 1982] he set himself in a lawn chair and attached 45 helium balloons to it. His intention was that these balloons would lift up his lawn chair, and he would hover about 30 feet above the back yard. Instead, when he released the tethers, he soared 15,000 feet and got caught in the prevailing winds. He had a pellet gun with him and the only thing that would get him down was to start shooting balloons, so he shot a couple. But then he dropped the gun. So now he’s up there at the mercy of the weather and he gets into the flight path of an airport.

Eventually, the balloons started to lose their buoyancy. When he came down, the balloons got caught in a power line which caused a blackout in the neighbourhood.

This would be in the category of “It seemed like a good idea at the time.”

Just a cursory look at the last 10 years’ big stories: we’ve got George Bush, the war on terror, balloon boy, the bubble bursting in the real estate market… there’s some competition for top quirk.

Two things stand out [post-2001] as unbelievably ridiculous. One involves George Bush and the other involves Dick Cheney. With Bush, it was him landing on the aircraft carrier with his “mission accomplished” sign and that stupid grin on his face. Then there was when the Iraqi journalist threw shoes at him. I tell ya, from mission accomplished to that… Then you’ve got Dick Cheney shooting his hunting companion in the face.

What’s next? Are things going to get weirder?

I can’t imagine that. I think there’s going to be a spread of this kind of amateur publicity [like Facebook and YouTube]… Instead of things happening and that becoming the news quirk, people are now thinking, “What can I do to that’s going to get me on YouTube? What can I concoct?”

Exactly. If you took that episode and juxtaposed it with Larry Walters and his patio chair in 1982, I think that’s a good illustration of how things have changed in the past 27 years.

Is there any irony that you work on log cabin magazines? That couldn’t be more wholesome.

Maybe that’s how I maintain my sanity. All the stories in the magazines I write have happy endings. Everybody wanted something and made it happen, and lived happily ever after.

Are you planning to do this forever?

At least for the next 10 years.