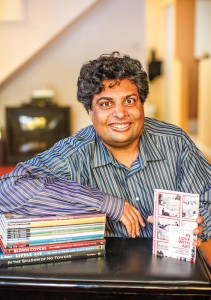 The long marginalized world of comics is littered with anti-heroes and criminally underappreciated souls. Tap any comic geek on the shoulder and they’ll likely regale you with tales of unknown artists working in obscure subgenres that get no respect.

But if Jeet Heer has his way, at least one unsung heroine will partly get her due.

In his new book, In Love With Art: Françoise Mouly’s Adventures In Comics With Art Spiegelman, Heer looks at the career of alternative comics mastermind Françoise Mouly. Mouly currently holds the post of visual director of the New Yorker magazine, but her roots in graphic art go back several decades to when she and husband Art Spiegelman co-created the seminal RAW magazine in the 1980s.

Heer, a widely published cultural journalist who divides his time between Regina and Toronto, points to the legacy of RAW — namely, the contemporary graphic novel and the careers of such (relative) household names as Chis Ware, Charles Burns, and Lynda Barry.

Never heard of Mouly?  You’re not alone. I asked Heer about his under-appreciated subject, whose importance can’t easily be over-stated.

You’re a person of colour writing about a woman in a predominantly white male world. What drew you to Mouly’s story?

The first time I became aware of Françoise Mouly, I must have been 11 years old. At that time, she was a colourist for Marvel comics. Women didn’t get a lot of jobs in comics, but they were often given the job of colouring. And, even though I wasn’t a politically enlightened kid, I was very sensitive to difference.

I wrote an article for the National Post about 10 years ago where I was trying to describe Art Spiegelman’s career as an editor. I had written: ‘Leaving Françoise Mouly aside for a moment, Art Spiegelman’s achievements are blah, blah blah’. My partner, quite rightly, called me on that, and asked ‘Why are you leaving Françoise Mouly aside? She was as important at RAW magazine as Art Spiegelman.’ And that really got me thinking because I had been aware of Françoise my whole life, and respected her and the magazine that she did, but I’d never written about her. For every one article that anyone has ever written about Francoise, there are at least 500 to 1,000 articles written about her husband.

Which makes you wonder where Spiegelman would be without Mouly. I guess you can’t tell her story without mentioning his, but can you tell his without telling hers? Evidently you can.

Well, people have, but I think they’re wrong to do so. The story I tell starts with the late ’70s when Art Spiegelman is a very marginal figure in the culture. He’s not the famous person he is now, and he’s doing stuff that is very underappreciated. She realized the potential, and realized that he couldn’t’ be an artist and work in isolation. You have to have a community, which she created around her publishing company and RAW magazine. And I think that was the crucial change for Spiegelman and many other people. It’s a very symbiotic relationship, but I don’t think Spiegelman would be Spiegelman without Mouly. But there’s this unwillingness to acknowledge who Françoise is and what she’s achieved.

It seems ironic that the culture around such a traditionally marginalized art form would somehow be blind to the situation of someone like Mouly, who is also being marginalized just by virtue of being a woman in a guy’s world.

Geek culture has that a lot. I don’t think it’s an unconscious sexism; it’s almost an active desire to have boys’ culture. I don’t know how much you follow the geek culture stuff, but there’s a controversy with a lot of guys who don’t like the fact that women are getting into science fiction and gaming and stuff. They’ve even created this category called ‘fake geek girl’. I mean, it’s not geek culture, it’s art comics, but [Mouly] has faced the same hostility. Like, ‘You’re only into comics because you’re Art’s girlfriend’. So there are these guys who worship Art Spiegelman, and would go to his house and interview him at length, but would not even look at Françoise, let alone solicit her opinion.

I admit, I’m not so deep into comic culture, and only became familiar with it through an old boyfriend. At first, he introduced me to Peter Bagge, but later I got into Chris Ware and Adrian Tomine, and really loved it. It’s definitely a world that is more easily accessed by guys than it is by women, even though the legacy of RAW magazine spawned things like the publisher Drawn & Quarterly and artists like Julie Doucet. It created an environment where women can take part. When you think of comic artists, you think of people concerned with their own interior worlds, whereas Mouly sounds like someone more interested in the world around her.

At the New Yorker, she’s very much engaged with the world at large. I don’t know if you saw that cover, after the gay marriage issue at the Supreme Court in the U.S., and the New Yorker cover had Bert and Ernie?

Yeah, I loved that.

Well, the New Yorker counts things called impressions or links, and they got 657 million impressions from that cover online which is more than the population of North America. She obviously didn’t draw the cover, but she was part of the process by which it was selected and put out there. That’s part of her being engaged with the world. She loves coming up with stuff that’s going to poke people in the eye and get a reaction, and she’s engaged with politics and culture broadly.

RAW magazine was certainly a subversive force culturally. How do you think it reflected the political sentiment of the time?

Art and Françoise are very much New York liberal leftists who were aghast at Reagan’s America. And even the title, RAW, is kind of a challenge to that nostalgic, complacent conservatism. So you had a lot of stories about the danger of nuclear weapons and nuclear war. Sue Coe and Françoise worked on a book called Porkopolis about slaughterhouses, dealing with food production and what exactly goes into what we eat. So there was definitely a political context in RAW.

Where do you think the scene would be today without RAW?

I feel like, without RAW, you wouldn’t have the graphic novel. In 1980, when they started it, you couldn’t go into a library (or) bookstore and take out graphic novels. You certainly couldn’t go to university and take courses that have works like Maus being taught. The entire emergence of comics as a legitimate art form, I think, really comes out of RAW. In cold war America, you had a kind of de-politicization of art, and an idea that art shouldn’t comment on things. And RAW was really one of the first forces that really challenged that [and] changed the art world in a significant way.

So RAW wasn’t just read in the comics world, it was read by people in galleries and elsewhere and it created this opening for political art which, in some ways, has been continued by the New Yorker covers.

Who do you think everybody should know about but maybe doesn’t?

Kate Beaton. She’s in her 20s, she’s from the east coast — Cape Breton — and she does these kind of goofy online comics that are satires of Wuthering Heights or The Great Gatsby but they’re done with a really sharp feminist sensibility. And also a lot of comics about contemporary life. And she has a very nice line. I find her work very exciting.