I love the BNL but I don’t love this album 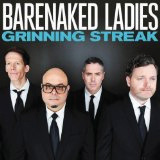 “You either die a hero, or you live long enough to see yourself become the nostalgia act.” –– pop-rock Batman

Cards on the table: I’m a huge Barenaked Ladies fan. I’ve shown up three hours early for an autograph signing. I’ve sobbed while singing along to album cuts off Born On A Pirate Ship. Heck, I’ve had them as the default “favourite band” setting in my heart since grade 2. Sure, they have flaws, but I’m cool with it because I’ve bought into their whole deal. (Not sure if I’d want to go on the Ships And Dip cruise, but LIKE WHATEVER DUDE THEY’RE JUST GOOD TO THEIR FANS AND JUNK! LET’S SEE MOZART BE THAT COOL!)

That’s why I feel like a bit of a treasonous dirtbag for feeling so “bleh” about the new effort.

Grinning Streak is definitely an album of the post-Steven Page era. The focus is on Ed Robertson leading the band further into very sincere album-oriented rock waters. Robertson’s heart-on-sleeve approach isn’t a negative –– a good number of BNL’s best songs are eyes-n-hearts-wide-open Robertson numbers –– but without Page there’s a lack of drama and exploration. Drizzling a few tracks in late ’90s-y lite FM electronic flourishes (“Limits”, “Did I Say That Out Loud?”) subs in for growth and it doesn’t really pan out. It wouldn’t be an issue if there were more worthwhile tunes (“Odds Are” sticks to the ribs), but there’s a weird treading water feeling to this album.

This is the sort of thing that wracks me with fan guilt. I want to be happy the band’s happy doing their own thing, but couldn’t it just be … better? I dunno. Is this what being Weezer’d is like?

It’s impossible to properly review a Jay-Z album without embracing the Jay-Z brand. In that context, he’s untouchable. While Internet culture keeps a rotating cast of young, innovative and highly skilled MCs in the overnight spotlight, it will never raise them to the same level as Jay-Z. Action Bronson will never own professional sports teams, A$AP Rocky won’t force the RIAA to change its certification stance and Joey Bada$$ will not get Oprah’s cellphone number.

Magna Carta Holy Grail is the biggest hip hop record of 2013. It’s not perfect: Justin Timberlake’s contributions are cock-rock bullshit, “Part II” is a wilted slow jam and when Hov mentions Miley twerking, you’ll wince like you do when your father texts you emojis. Those are small quibbles, however. While his closest counterpart, Kanye, chases trends from autotune to agro-electro, Jay remains on top of the game by staying true to pure, influential hip hop. /Michael Dawson[hr]

Everyone likes to dance, right? Even indie stoner jam kids from the West Coast. Fantasy, the third album from Vancouver duo Lightning Dust, Amber Webber and Joshua Wells (both from the band Black Mountain) is a dance-y synth pop record. It’s way too spooky for the club scene — the slower pace and layered ’80s-esque vocals make it more of a slow burning, swaying-to-the-lights dance type of record. Leave the bump-and-grind at the club and enjoy this one in your basement. /Chris Morin

This five-member New York band strikes a good balance between atmosphere and substance. Caveman is mostly on the spacey side of the indie-folk genre, with ghostly vocal harmonies, airy songs and occasional reverb present on many tracks (there are exceptions: some songs, like “In The City” and “The Big Push”, are dominated by synths and resemble early Shins indie-pop efforts). Throughout, guitars become prominent then fade into the echo-filled background as they please. The song’s frameworks are solid. Ultimately, Caveman’s music reminds me of great, symphonic mad geniuses like Brian Wilson. Caveman isn’t just mucking around; the band exudes the kind of purpose that could lead it to that kind of greatness. /James Brotheridge